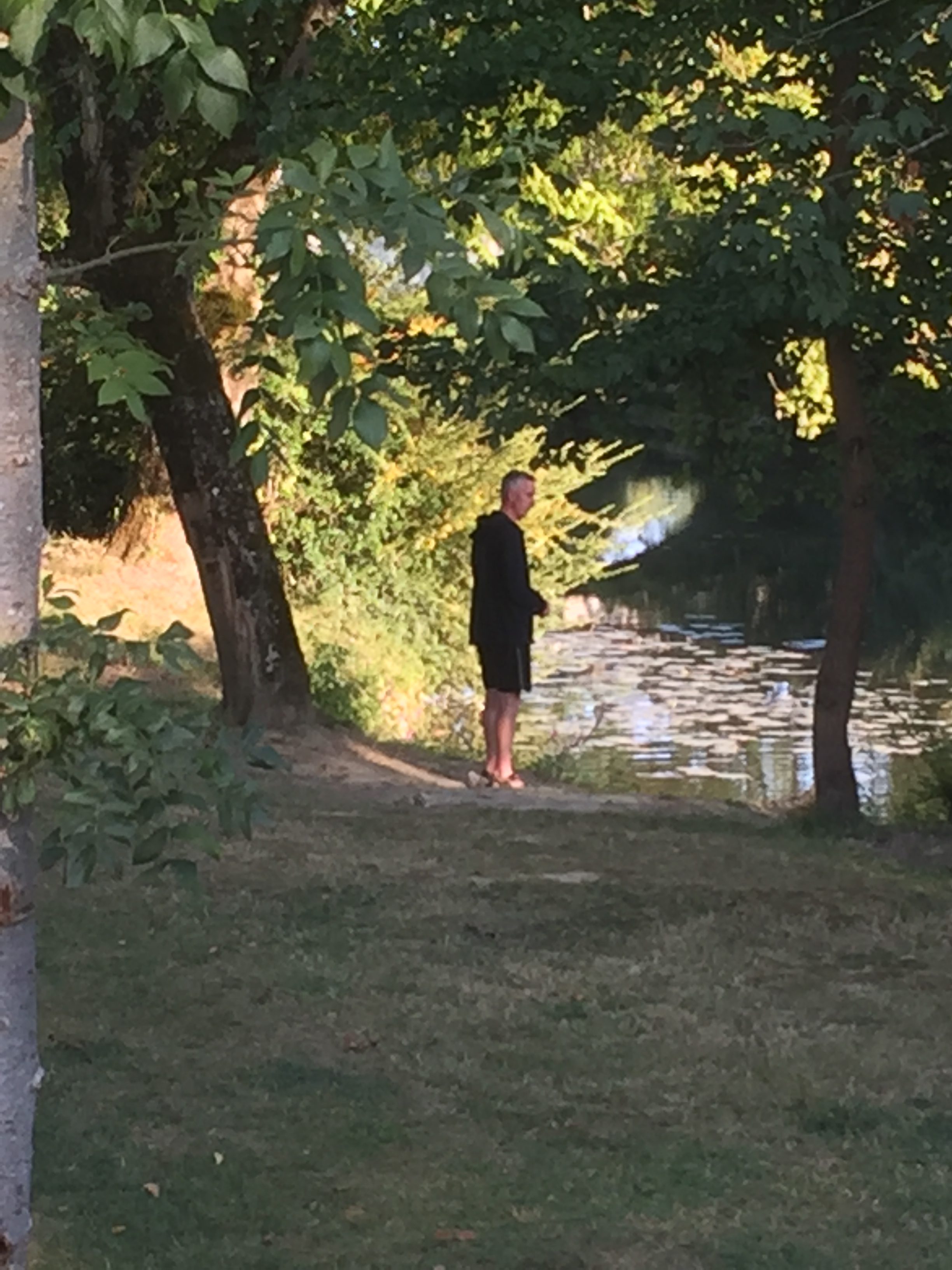 The name Entre-Deux-Mers means ‘Between the two seas’ here it is the rivers Dordogne and the Garonne. We have enjoyed being in this part of France, with it’s magnificent stone buildings in the city’s to the calm, beautiful countryside, where at times the roads are almost empty, we could drive a good 10 minutes and not see another vehicle.

We drive to the quaint village of La sauve stopping off to look at the abbey. Founded in 1079 it rapidly grew to become an important local centre with up to 300 monks living here. At that time the abbey was surrounded by forest rather than vineyards. Set on a small hill above the village the abbey ruins are quite substantial and there are several particularly interesting examples of the local roman style architecture to be seen.

The abbey is now listed as a UNESCO world heritage site, being one of the important historic monuments on the pilgrimage route to Santiago de Compostela, and an important starting point for pilgrims from this region.

There are a couple of Boulgueres in the village so we pick up some bread. The lady explains that the French favour the ‘“baguette de tradition” it is made from wheat and corn flour, when cut it is golden in colour and nutty in taste, probably one of the best we have tried.

This part of France is really bike friendly and there are lots of cycle routes. The Roger Lapebie Cycle Path named after the 1937 Tour de France winner, goes from Bordeaux to Sauveterre-de-Guyenne.

This  58 km car-free, cycle path is built on an old rail line so there are no hills to contend with, most of the route is virtually flat, making the path perfect for all abilities.

One of the many stops along this route

Trying to keep up with John

The old stations along the way have also been transformed into restaurants, wine bars, bike stations and lovely picnic areas.

We drive to the village of Creon one of the stops on the Lapébie path, and home to the first bike station in France. From here we cycle to the village of Latresne. It’s a lovely ride through the country side,  in parts we are shaded by woodland, it’s clearly very popular with old and young.

By the time we get back to Créon we have cycled 17 miles, I have a feeling my legs are going to hurt tomorrow.

Our bikes parked up at Créon

Chateau du Grand Puch is another passion site. We enter the long drive that winds through the vines and finally arrive at this stunning chateau. Classified as a historical monument, this 13th  century chateau  is set in 18 hectares of vines and unique woods.

Driving up to Chateau Puch

Owned by the Lacund family for several generations it’s a fairytale looking building with it’s watchtowers and loopholes. As we walk through the grounds passing the stables and the old blacksmiths house you can see why they strive to keep the family name here.

Walking across the fields at Puch

Parked underneath walnut trees between the chateau and vines we spend a quiet night here. Waking up in the vineyard was a great way to start our morning. Enjoying our breakfast while looking over the grounds was quite a privilege.

Saint Emilion is a charming village it’s probably best known for the vineyards which surround the town. We enter through one of the seven gates that are part of the original medieval fortifications. Inside the walls the streets are steep and narrow leading to several open squares with beautiful buildings. With stunning views across neighbouring villages it’s one of the prettiest places we have been to.

The history of the town dates back almost 2000 years when the Romans planted vineyards here as early as the 2nd century AD, while Saint-Émilion itself dates from the 8th century when a Breton Monk called Emilion came to settle here in a hermitage carved into the rock. The cave where he lived from 750 – 767 AD subsequently became a pilgrim destination.

Wine isn’t the only tradition here, Macarons have been made here since 1620. The Ursuline sisters adapted a recipe invented by Italian monks during the 8th century. Today there is only one pastry family that has sole custody of the original recipe.The light biscuits are made from crushed almonds and icing sugar in equal amounts, caster sugar and egg whites; the crust must be granular and crunchy and the inside fluffy, absolutely delicious.

We only stop briefly at the village of Pujols. Perched on a hill it’s said to be one of France’s `Most Beautiful villages`. It’s a small fortified town with narrow streets decked with flower beds. The old well, fortified gates and a panoramic view of the Lot valley add to its charm.

Founded in 1281 by Edward I, King of England and Duke of Aquitaine, Sauveterre remained English until 1320. It changed hands several times before becoming definitively French in 1451.We head through one of the four archways that lead into the town square, there we find shops, bars and restaurants. Part of the Lapebie cycle route its a lovely place to stop off.

This is a spire of the moment decision to go here but pleased we did. As we drive up the hill we are surprised to find such a lovely chateau with fantastic views of the countryside. The village is quite busy for a Sunday morning, after a quick stop at the book exchange, which as a great selection of books, we go for a drink.

I ask for a coffee, but fearing I may end up with an espresso,  I say Latte / Grande.  Oh how I wish I had Kept my mouth shut, when it arrives, it’s the size of a soup bowl. I’ve since learnt to ask for a white coffee in French.

A rather large Latte

We park on the river bank at Allemans-du-Dropt to have our lunch it’s such a pretty setting. There is an aire in the village, well we can actually see it from where we are but decide to drive further on.

Our next house sit is just a few miles from here so we stay here tonight. With just 5 motorhomes its a lovely spot right on the river bank. We are parked next to Ray and Sue from Knaresborough, Yorkshire and their 2 dogs Toby and Lucy. They too have been to Spain this summer so it’s a nice afternoon exchanging stories.

Not sure if this is Toby or Lucy photo bombing

Later that evening as we sit, and eat dinner by the water, the lights by the bridge change colour it’s such a pretty place. I wish we had found it earlier we would have spent a couple days here.

Dinner by the river

Next morning we say our goodbyes. Before heading to our next house sit, we stop at the supermarket, and for a Monday morning, it’s busy. Whilst waiting to pay I get talking to Juliet who is on holiday. We chat about my bad French, Juliet’s holiday and how we all have jittery moments in life. Juliet’s parting words to me, just think of the showbiz saying  “Tits and Teeth ladies!”. I have a feeling this will be thought of often.