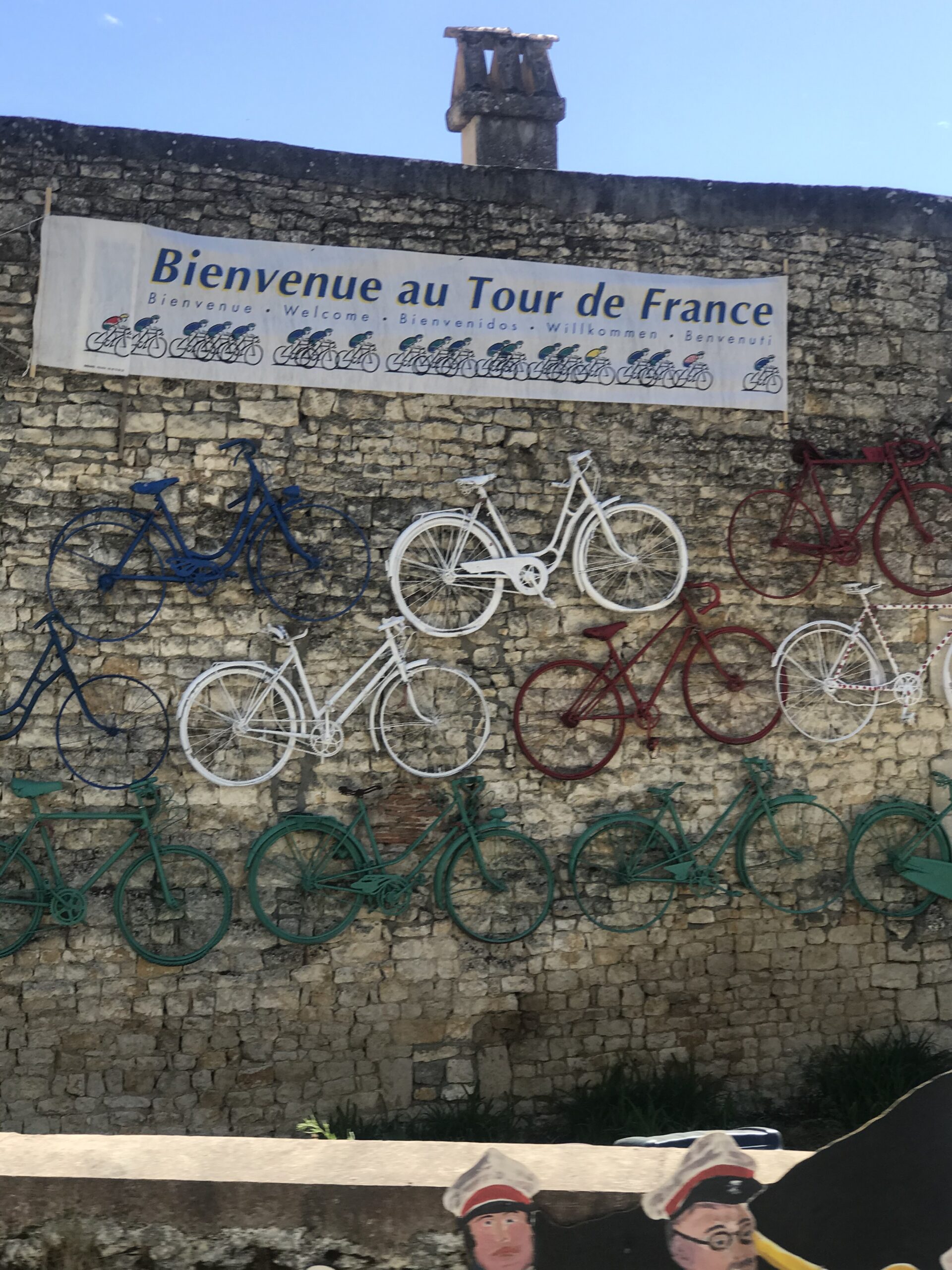 When Lockdown ended in June we hummed and hawed has to whether we should venture anywhere this year. We understand that for some people travelling while the coronavirus pandemic continues across the world would be a no go but with the year passing by so fast, we make a snap decision to head for France.

As we enter the port of Dover it’s relatively quiet so we are surprised when we are pulled aside to be tested for explosives which is a first for us, thankfully we get a negative reading and are sent on our way to get in the line with all the other vehicles but we soon realise there are very few English number plates waiting to board.

With the white cliffs in the distance, this was going to be a shorter different adventure for us as we hit the French roads to visit some of our favourite parts of France.

Arriving later than expected due to the ferry being delayed we spend the night at the aire in Wissant and after a short walk along the seafront to stretch our legs it’s soon clear people here are also being careful about observing the social distancing rules.

And apart from seeing a lot of people wearing masks, it feels quite normal and we feel very safe where ever we go over the next few week.

Sandwiched between Normandy and the Loire valley is Mayenne it’s an area we have visited before. Surrounded by peaceful rural villages with its namesake river meandering through the countryside it’s a green and hilly region full of fruit trees. In the village of Gesrves, we stop off to have lunch and a catch up with Danny and Mandy who we meet on our first trip to France.

Later that afternoon as we leave the area we pass Château de la Motte-Husson from the tv programme Escape to the Château. From the road, this 19th-century Chateau is an impressive building where we spot Dick strolling across the drive to what appears to be a very neglected-looking garden.

Weekends in some areas can be noisy so we decide to spend the next couple of days at an aire on the Mayenne river. We have a lovely walk along the cycle route to the village of Change but we weren’t prepared for the all-night rave that continued well into the early hours!

Since being in France it’s been damp, cold and raining so over the next few days we move further south in hope of better weather. And it’s at Saint Aubin Ie Cloud we park up on a farm where we are joined by Tim and Alison in their motorhome who like us are in the area to watch the Tour de France.

Departing in Nice this year will be the 107th edition of the Tour and it’s not far from Poitier at stage 8 where we pick it up. Over the next week, we get to see several stages meander its way across unspoilt, hilly, picturesque countryside and valleys where the riders get the chance to break away from the peloton giving us a real treat of how strenuous and perilous this event can be.

Yet, the event is so much more for the fans, not only is it free but every day an hour or so before the peloton arrives the excitement builds for La Caravan passing by throwing us and the locals an array of goodies. Then silence descends amongst the crowds as they listen for the hovering of the helicopters to signal the imminent arrival of the riders.

Today we watch the tour in the Village of Val-de-Virieu with its beautiful Chateau high up on the hillside. Parked on the edge of the village at the bottom of the hill we have a great view of the road winding up.

So with our masks on we line up along the road with the locals to see the breakaway pass us before the rushing sound of the main peloton wheels whizzes up the hill and just like that it’s over in a flash, the crowds disperse and we pack up it’s time for this sleepy village to return to normal. And for this year, it’s time for us to say goodbye to the tour as we head for the alps.

This afternoon we have a few hours drive ahead of us before we get to the alps so we stop off to pick up groceries on route before tackling the roads of Grenoble.

Motorways are places we very rarely travel along but the few we pass seem to still be just as busy as normal, and having to reroute a few times due to road works is no fun when your ditzy satnav thinks she’s on a tea break! We much prefer the quiet country roads where we can stop for a cup of tea and enjoy the views.

With the weather improving during the day our shorts and t-shirts are back out as we spend the next week travelling across the mountains.

Nestled in the French alps is the pretty village of Allemond. It’s early evening when we arrive so we park alongside the river for the night then move down to the campsite the following morning.

The facilities here are great so it’s a good opportunity for us to catch up on the laundry and a quick tidy of the motorhome. In the afternoon John goes off to cycle Alp de Huez whilst I have a wander around the village.

On leaving Allemond we follow the windy roads across the mountainsbut being a left-hand drive the airy drop is always on my side and it’s a long way down but the views are amazing. As we drive along discovering little Alpine towns there’s definitely something about the Alps, with the sun-drenched cafes,  people strolling along the lakeside pathways, cattle with their jingling bells moving across the hills, we also get a glimpse of Marmots playing on the grass verge.

From Col du Glandon until we reach Lac Annecy we pass steeped sided valleys with beautiful pastures and traditional French alpine chalets. By day the weather is glorious but come early evening the wind picks up, with the clouds rolling overhead and the rumbling of thunder, we know it won’t be long before the rain starts.

At lake Annecy, we decide to park up for a couple of days at Bout de lac where the site is surrounded by farmland and stunning views.  It’s an area that’s a hive of activity from walkers, cyclists to the more daring paragliders jumping off the mountain tops there’s always something to see.

Heading north we pick up the route John cycled several years ago with our son James, so it’s an opportunity for me to see some of the villages they stopped at.

The small village of Thoirette is where we stop next and thanks to its bridge it’s now a connecting point between Jura and Ain, which otherwise would have remained separated by the river.

With just one Main Street we park up at the aire and have a walk around but it doesn’t take long. Later we are joined by any motorhome and the friendly couple from Strasbourg pop around to say hello.

Next morning we buy fresh bread before heading for Seurre a small town located in the Saône valley. Laying at a crossroads with routes to the towns Dijon, Beaune, Louhans and Dole it’s full of beautiful stone and wood vintage buildings. We find a spot by the river and park for a cup of tea.

Before we find somewhere to stop for the night we drive to the village of Baigneux-Les-Juifs. John stopped here a few years ago but sadly the B & B is closed but a quick chat with the locals brings us up to speed with what happened to the owners.

Today we find ourselves roughly  60 miles from Paris at Chateau-Thierry.  Nestled in the valley of the Marne River it’s wooded hills standing like parallel sentinels on each side, with its streets rising like terraces above each other and houses with walled gardens line the main boulevard it’s clear this area has lived through centuries of history. Today it seems a little run down with overgrown pavements and derelict buildings as we park at the aire next to the river and take a walk into the town.

This trip we haven’t eaten out but we always try to buy something from the local Boulangerie. So this afternoon when we stop in Grenay a former coal-mining town until the late 60s and have a walk to the Artisan patisserie.

Continuing along the D947 passing Hamlets dotted with war memorials the weather is definitely turning. We decide to spend our last night in the town of Marck. Situated on the coast with its historical lighthouse that marks the border between the North Sea and the English Channel, it’s an area that was heavily affected during the Second World War.

It’s blowing a gale force wind today so when we arrive at the aire to find individual bays separated by hedges we hope this will shield us. Unfortunately, the wind has other ideas and continues to batter the motorhome and surrounding trees until the early hours, so we get very little sleep.

Next morning as we head back to Calais to get the Euro tunnel it’s still blowing a hooley.

This has been a short trip for us and, to be honest, I wasn’t sure what it would be like this time since the coronavirus took us all by storm but we have had great fun. Travelled roughly 1500 miles, there’s been a new French hair cut for me, the buying of local delicious produce,  we had a few sleepless nights due to an irritating French man and bad weather, and at times when the satnav isn’t quick enough and we shoot off in a different direction, I’m sure John thinks he’s Lewis Hamilton driving but from where I’m sitting it feels mores like Clark Griswold!

All in all, it’s confirmed to us that travelling is still safe. I think by being wary and taking precautions we can all try to deal with this situation and get back to enjoying our adventures and have a good time.