Adventures in the Nether regions 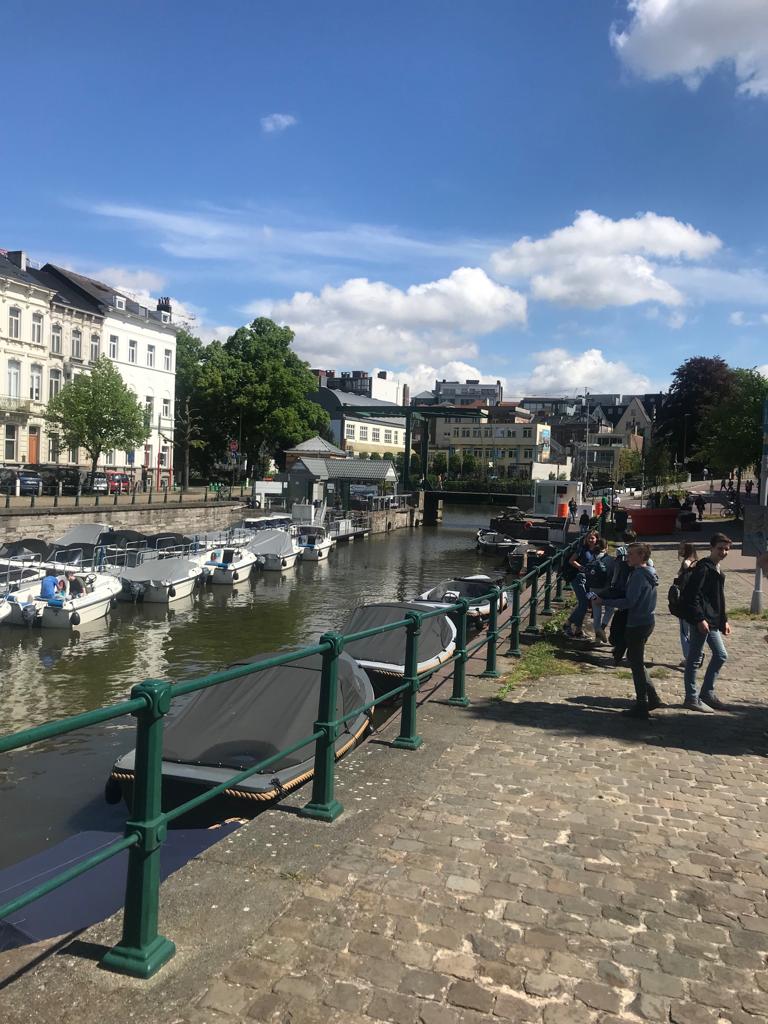 Not far from Ypres is the village of Harelbeke, it’s here where we spend the night. It’s a small site next door to the football stadium with its impressive sports area,  football pitches, running and walking tracks. Next morning it’s finally stopped raining so I manage to walk one of the circuits.

Since 1958 this area has been the start and finish place of the E3 Harelbeke, semi-classic cycling race held the week before the Tour of Flanders.

From here we drive to Ghent but no sooner have we found somewhere to park and get the bikes off the back we are moved on by the police due to a local event taking place. So we drive a short distance down the road and park next to the Ghent–Terneuzen Canal.

It’s about half an hour cycle into the centre and even though it’s windy the sun is shining.

There are bikes everywhere you look, it’s amazing watching them navigate their way through the traffic, moving side by side with the trams.

You soon realise there’s no traffics jams, no hunting for parking space, just chain your bike up to where ever you fancy. I’m not a keen cyclist but the lack of hills, the easy distances and incredible cycling infrastructure make riding a bike here a pretty good experience.

The old city centre is beautiful with its grand square that for centuries has been a meeting place, narrow cobbled lanes, towering churches, super old brick buildings with canals running through it. Ghent’s wealth in the early medieval period was thanks to the import and export of wheat, and the manufacture of luxury woollen cloth. The city’s great and good weren’t shy about parading their riches and the Catholic Church was often the happy recipient.

Back at the motorhome, we decide not to stay here the night even though it’s probably safe we feel it’s best to move. Being so close to the border we cross into the Netherlands just say we have visited.

So before we start moving John programmes the sat nav for the village of sav. For anyone that as not tried a sat nav, I can tell you now that once you have programmed in your destination, it will direct you there by giving advance directions, and if you miss the turning you will hear that familiar voice “ At the next opportunity, make a U-turn!” Last year this sat nav guided us across France and Spain with very few hiccups.

So it’s whilst moving we decide it’s about time we give her a name, John still has his doubts about her decisions and decides to name her ‘Ditzy’!.

Without her, I fear divorce if not murder may have ensued due to my poor map reading skills. I’m the type that turns the map the upside down, I have to keep putting my glasses on and off to read and with my side of the dashboard resembling the makeup counter at Boots, hand cream, lip gloss to name just a few items.

I haven’t got time to be applying all this and looking at the map!

All totally frustrating for John who needs advance warning and immediate decisions at unsigned junctions.

Sas van Gent is literally across the border so we follow the canal that links into Scheldt estuary. This should have been a short drive but ‘Ditzy’ has already alerted us to a road closure and with John refusing to listen to her it seems like an endless trek to the site. When we finally arrive the site is on the bank of the estuary opposite the town and with the weather turning we spend the evening watching cargo ships and pleasure boats passing.

The following morning and there’s no change in the weather. It’s so windy since arriving we have had problems with the gas whilst cooking and we think it’s the wind that’s causing the flow to the cooker so cooking on a camping stove has been fun.

After a quick walk around the town where a local fete is taking place we stop to watch the passing band but with it now raining harder we head back to the motorhome and drive along to Hulst.

Parked up with the river and park on one side and the pretty town of Hulst on the other. We have a walk into the town passing the gates, ruins and windmill. It’s not long before it starts to rain so it’s back to the motorhome for the night where this awful weather continues until late. Let’s hope it improves when we cross another border.