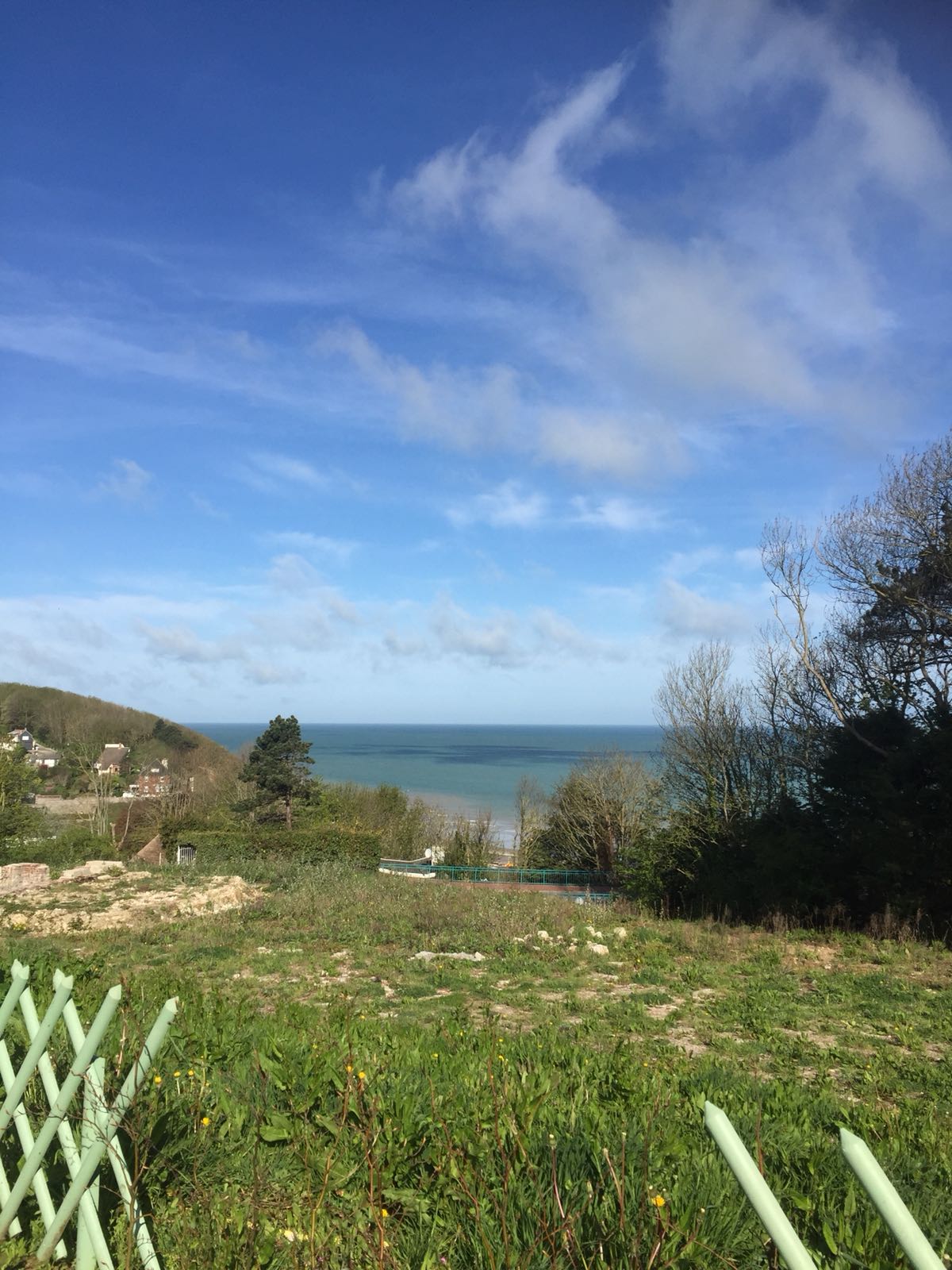 Newhaven to Dieppe is a four hour ferry crossing and its a clear sunny day, so the sea is calm. We find our way up to deck six and look for a seat near plug sockets to charge our phones.  It’s not long before another coupe sit near us and they start talking. Pip and Brenda, they have been back to the UK to see family. Pip, a lorry driver is extremely chatty and before long we have had a complete run down of their life! By the time we disembark he as told John where he can get work and offered us to stay with them if we are in the area.

DFDS the ferry service are very efficient and we are off in no time. We reach passport control and John throws every French word he knows at the poor girl; auriovour, merci, Bonjour, bonnet du douche, she doesn’t know which one to answer first! Let’s hope his lingo improves.

We have purchased several books that give you locations of where to stay. You can find details of all the books i have read or used on this trip under reviews. So we use the Aires book tonight but the coordinates we put in aren’t directing us to the right location so we stay at the first available place we find. It’s been a long 24hrs and being on the road is tiring.

John is doing all of the driving at the moment and I am map reading along with the Sat nav. Reading a map correctly is vital for getting from A – B, but it’s not a skill all of us have. So it’s no surprise that couples fall out when the strain of navigating proves to much. Not that we have yet, but as we find ourselves motoring up the dead end of a industrial estate once again you realise a blind orangutan could map read better than me!

After re-reading the books I realise that I having been giving John the wrong coordinates. What should of been a 15 minute trip was coming up as over 4 hours. So when the sat nav purred in a silky voice ”take the next turning on the left” it wasn’t her fault we were heading in the wrong direction. Needless to say John is now keeping a close eye on both the women giving him directions!

We have travelled to quite a lot of places in the last week so I thought I would write a small piece on each one.

Hornfleur,  was essentially built for commerce. It’s harbour sits on the southern side of the Seine’s estuary.
During the Hundred year war, the french King had it fortified, but that didn’t stop the English taking control over several decades. It’s a pretty harbour with high-rise homes, packed tight to each other , especially around the Vieux Bassin where Shops fight for space behind the quays and restaurants clutter their tables across the cobbled streets. I’m not sure that I like Hornfluer it’s to touristy for me and not the real France. We are staying at the Aire just off the harbour and it’s our first time on electric hook up, so we have to make the most of it, everything is on charge.

We have never used the microwave, so I thought i would try that out too but within minutes of turning it on the entire site is with out electric! Over 200 motor homes without power, most of them french and i think I’m the cause, it’s like Briget Jones as landed. I quickly unplug everything….Who wants a jacket potato anyway!

St Lo
Is apparently the  largest city in the Manache area. We are stopping by the river tonight. So we take a walk into town via the river. If you head up the hill into town you get fantastic views across the river.

River behind us at St Lo

Home for tonight at St Lo

Sains
Is a small pretty, sleepy village in Brittany. We have a wander round the village but only see a tractor passing by. Just across the road from where we staying the we watch the local purchase there bread from a machine that is refilled daily.

Mont st Michel
We are staying in the next village to Mont Saint Michel. So we cycle part of the way and walk the rest. The Island is visible from a great distance and looks rather mysterious. Set in the bay where Normandy and Brittany merge, surrounded by beautiful white sands it’s unforgettable sight. It’s medieval streets are quite a climb up to the walled Abbey but worth the visit.

Marcille la vile
A snail farm is home for tonight. The owners are away so fortunately for me we dont get to see or try the snails, I’m not a fan. But we are able to walk the rest of the farm to see the sheep and guineafowl. We certainly know there’s a cockrel early next morning!

Villaines la Juhel / Averton
We stop here for the night at a beautiful country park where your’ll find people walking, cycling and fishing. On our walk around the lake we meet a couple who have lived here 27yrs. Chris (71) cabinet maker but looks and as all the mannerisms of Richard Briers who starred in the TV programme ‘The Good Life’. and Sarah (63) an artist whom have both lived interesting lives. Chris doesn’t speak much French so you can see why he likes to chat its probably quite lonely if you can’t communicate with the locals.

So, our first week in France is nearly over. At times it’s been extremely cold and wet. We have met some nice people and others that are feral, but we have still had fun, let’s hope it continues.