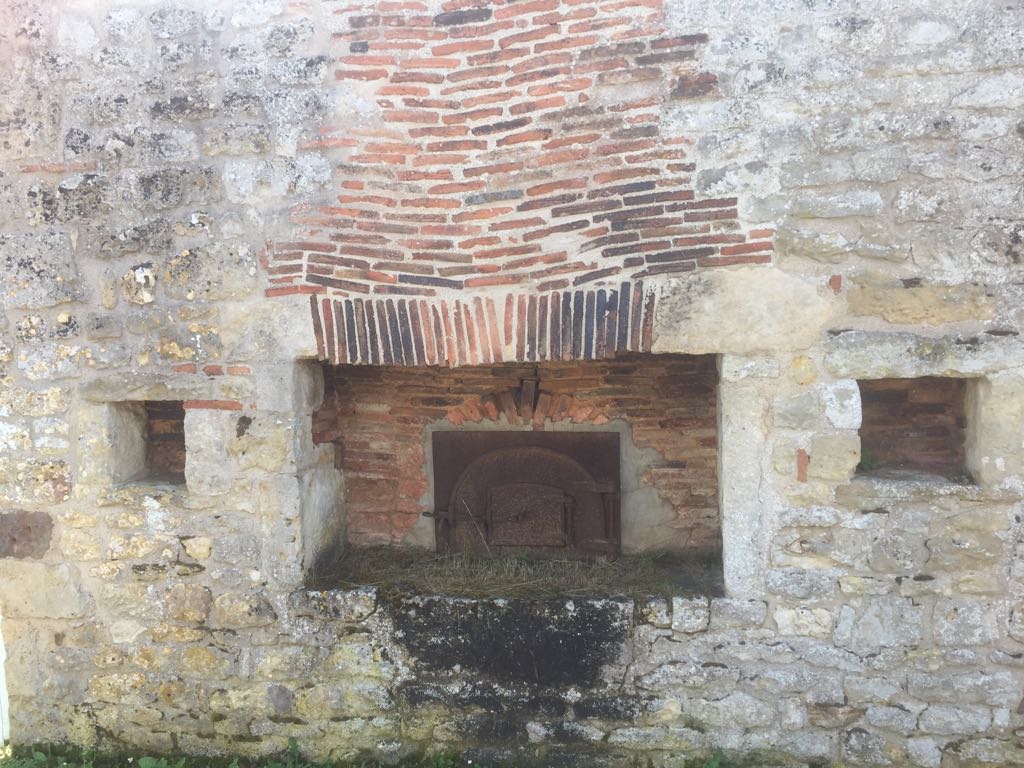 This morning we leave St Jean d Angely to start our next house sit near Ruffec.  Ruffec is situated in the Charente area of France. The Charentaise slipper is a traditional product of the area. it was made from the uniforms of the Royal marines , as well as the felt used in the paper mills around Angouleme.

As we enter the small village of La Chèvrerie we follow the winding roads around until we find La Genouillere a tiny hamlet on the outskirts, next to the forest. The names and the numbers of the houses seem to be random but we think we have found the house. So John starts to negotiate his way throw a set of narrow iron gates but before he as the chance to turn the engine off a French couple appear looking rather puzzled that there’s a huge motor home on their drive. They kindly show us to the house they think we are looking for.

So we pull into the drive where they have directed us to,  there’s someone chainsawing the logs in the garden because he doesn’t look up we think he might be the gardener. No one else appears so I get out to speak to him. I shout “Hello” and he eventually looks up. He also looks rather puzzled that we are there. So I say “Hello, we are the housesitters you’re expecting us”. To which he replies “yes, but your early”. I’m now a little confused. We were meant to be there at midday for lunch and it’s now gone 12.30. Before I can say anything else he adds “ we are expecting you tomorrow”.

Now my mind see frantically trying to picture our diary, I know there’s been a lot of scribbling in it but I’m normally good with dates and sure we are due here the 22nd. Could I really of got the dates wrong? A quick check of my emails reveals I have, oh dear.

By now John as joined us, David as introduced himself and he invites us to meet Alison his wife, he clearly isn’t the gardener. As we get near the kitchen door David calls out “ Alison, the house sitters are here” by the look on her face as she comes to greet us she isn’t expecting us either. This is the first time they have had housesitters so they were not sure what to expect, someone turning up 24hrs early and with a  brain across between Bridget Jones and Alice Tinker, they weren’t!

After a cup of tea, a chat and lots of apologising on our part, Alison kindly offers us lunch albeit 24hrs early. We spend the best part of the afternoon sitting in the garden chatting before we head off to find a local aire  to stay tonight. David and Alison offered us to stay with them but we feel that we have put them through enough stress for one day, we leave them in peace.

It’s a quick stop off at the supermarket to get food for the next few day before driving to the aire at Londigny. It’s down a very quiet country lane, right next door to the church. We are parked under the trees, the houses that we can see are either shut up or derelict. I have a walk around the front of the church, the doors are open, inside is pitch black, you can hear the silence, it’s all very eerie. Just after 9 pm, someone appears from nowhere on a push bike to lock the church doors. For a change, it’s been a lovely sunny day but now it sounds like there’s a storm on the way. So we shut ourselves into the van, I think it’s going to be a VERY long night. Next morning we are woken by the church bells playing a merry tune it goes on for ages. Apart from the tractor hurtling down the lane at 3 am, it’s been a relatively quiet night.

We spend most of the day getting to know the villages around Ruffec. And unbeknown to us Alison as gone into the village of Villefagnan to see her friend Jane. Jane  will be our contact whilst they are away if we need any help. Alison later tells us she is recalling the previous day’s events to Jane and at that precious moment we appear and drive straight past them. Poor woman must have  thought we were stalking her. Once again we are the talk of yet another village.

Later that afternoon we arrive for the second time and once again we are made very welcome. David and Alison show us around their lovely home, the routine of their pets and where to walk them. They have Millie the cat and 3 bearded collies Barney, Maisie and Dillon who are energetic, loving and always wagging their tails. The following day they leave for the airport and we settle into our new home for the next 5 days.

There has been a problem with the motorhome habitation door for the last week or so, so John decides to fix it. I will add at this point the motorhome is the only means of transport we have whilst we are here and it’s about a 10-minute drive to Ruffec where the shops are. After removing the door John decides a trip to the local Bricolage (B & Q ) is required. So off we go minus the door, where all and sundry can see inside. We get quite a few strange looks and I’m sure some people think we haven’t noticed the door is missing.

Once back at the house John leaves the door in the garage overnight so it hopefully sets before trying to secure the motorhome with plastic sheeting, the weather isn’t looking good and I’m concerned mice might get in as the cat brought us one this morning and I don’t fancy waking up with Staurt Little looking at me in the mornings!

Next day the weather turns and we have a severe storm, trees come down in the garden blocking the drive and the roof starts leaking into the lounge. John clears the drive of fallen trees and branches whilst I monitor the dripping ceiling. The weather continues like this on and off for the rest of the week. So we walk the dogs and cycle around the village in between the downpours, passing the time of day with Bernard who lives next door.

Making the most of the sun

John has been desperate to get his haircut and to my surprise agrees to let me have a go at cutting it, so out come the clippers. I haven’t a clue what I’m doing let alone know what a number 1, 2, or 4 are.  But a i proceed to run the clippers up the back of his head, then around the perimeter of his hairline. John keeps  interfering which is distracting and  I don’t think he realises how close I’ve come to nearly clipping his ear off or giving him a Sweeney Todd!

When David and Alison return they can’t believe how much bad weather we have had here. Our time here as gone quick but we have loved every minute. after dinner, we spend the evening in the garden where David introduces us to `Pineau` an aperitif drunk by the locals. a blend of grape juice and cognac, similar to a sherry. This week as given us a brief insight of life in a small French village.

Big thank you to David and Alison for allowing us to stay at their lovely home. We hope to see you on our way back up.