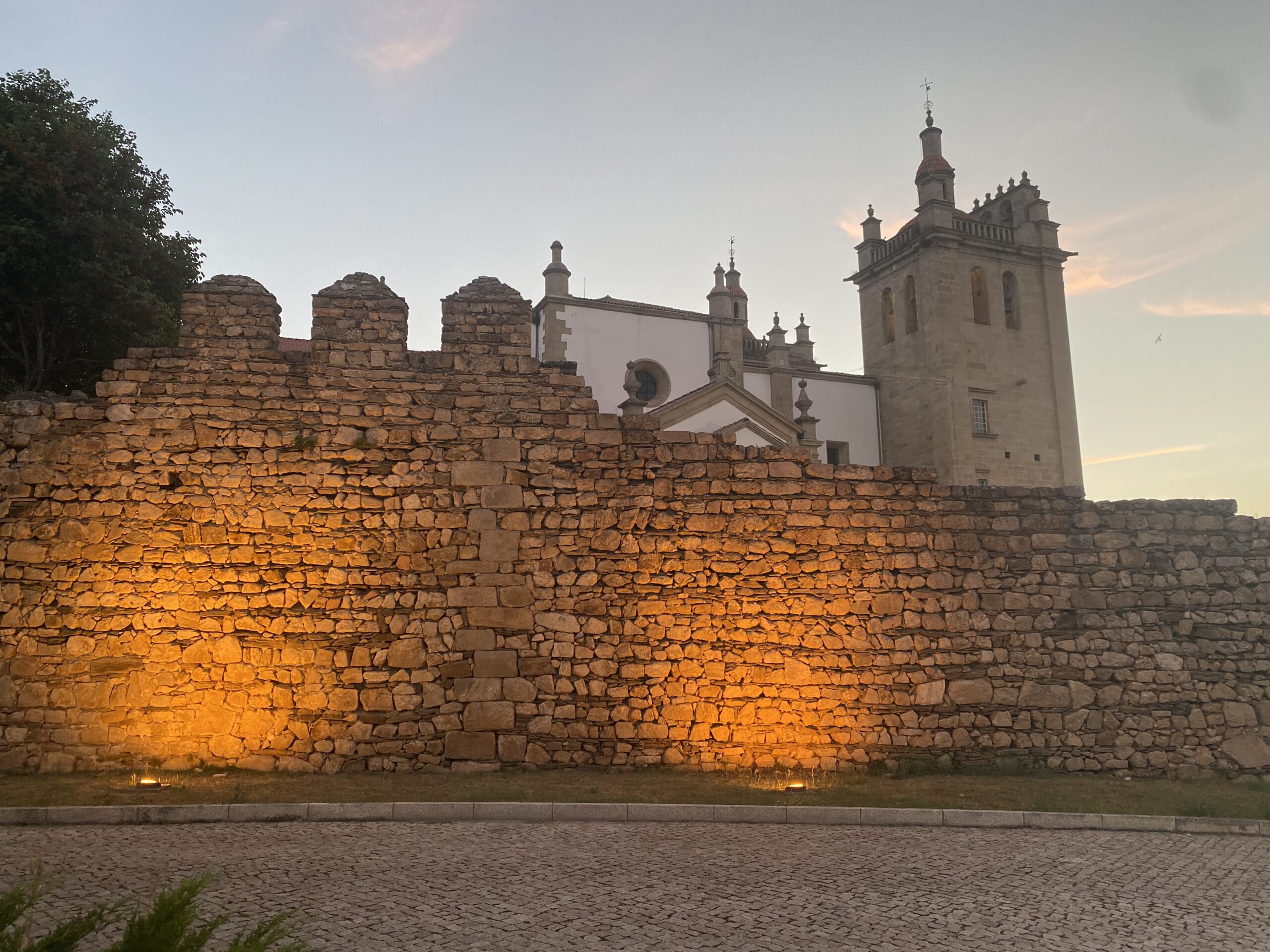 Before leaving the Arganil district we spend a couple of days at a site about 10 minutes from the village of Barril de Alva, it’s a quiet place with just one bar and shop.

The site is set on the banks of the river Alva, the bread van calls every morning around 10 am and just a short walk away is the bathing area at Urtigal, surrounded by woodlands, and a sandy beach with clear water we can’t help but go in for a paddle to cool down and watch the fish swim around us.

In need of drinking water, we move on and head to Penacova.

Perched up on a hill Penacova is a small but interesting village and as we enter the narrow cobbled streets the locals get up from having their drinks and watch with interest as we squeeze our way to tonight’s site.

We walk the steep hill back up to the centre and it doesn’t take us long to walk around the square dotted with bars and restaurants. From the edge of the square, there are great views of the River Mondego and the valley below as we sit with a coffee and take in the view.

Back at the site which is just a car park we are joined by a French van,  then shortly followed by a Belgium whose owner comes over for a chat.

Left-hand Georges aka George is quite a character, travelling full time he leads an interesting life; with several albums under his belt, artwork currently displayed in an exhibition and a  film of his life winning an award he as many a tale.

Photo – I have my hair cut

Coimbra ( pronounced Queenbra) is our next stop and we park along the river and walk-in. Often overlooked in favour of Porto and Lisbon, Coimbra also sits on the banks of the winding Mondego River. We spend the morning walking among the city’s medieval architecture and grand university buildings, one of them being the oldest in Europe, it’s easy to see why Coimbra was once Portugal’s capital for over a century. There are lots of places along the river where we could spend the night but decide to travel a bit further.

Tomer is a town divided into two, the ‘new’ town and the ‘old’ town. The old Town is paved with traditional stone cobbles and packed full of little shops and cafes which seem to come alive at night.

The site we stay at is just off the banks of the river Navajo, once a municipal campsite we assume it had a little more grandeur during its heyday, however during covid, it was used as a testing centre so these days it’s looking a little dishevelled.

John has had a back problem for just over a week and with it getting worse we decide to find some help before we move on fortunately for us this town has all its amenities; osteopath, chiropractor, banks, shops, supermarkets, an abundance of restaurants and take-aways and a large bustling market every Friday and thankfully a garage because we would be needing one of those too by the end of our stay here.

It’s late Sunday evening when we realise we have no power and when John tries to turn the engine over nothing happens and with the key turning there are no sounds or clicks, there’s nothing we can do tonight and with the promise of a jumpstart in the morning from our neighbour we head off to bed but with no central locking working we use ropes to secure the doors for the night.

With Scott’s help the following morning we are finally moving albeit it’s a little embracing getting a jump start from an ex-ambulance!! The garage is less than a 5 min drive, and once here we spend the day waiting for the batteries to charge and diagnostic tests to be carried out.

Hooked up to the garage electric they tell us we can spend the night on the forecourt but once the mechanics have gone home and the night wears on there are still people walking around and it’s noisy so just before midnight we decide to unhook the electric and head back to the site for the night where it’s safe. Early the following morning we are back at the garage where they discover it’s an electrical fault which is a relief and they soon have it sorted.

Over the next days we walk along the streets of the town and appreciate its traditional buildings and fountains,  John visits the Osteopath again, we have a wander around the market, and then back at the site we watch the comings and goings of daily life; with the weather warming up there are men in just their underpants, vans and their occupants that live here permanently, feral cats and children roam all day and it’s not every day you get to shower we two other men outside, but let’s not tell John about that.

Thirteen days after arriving in Tomar we finally pack up and move on but before leaving the area we drive the short distance to look at the aqueduct monument nearby.

Castel Blanco was an area on our list to visit however in the last 48hrs the temperature has risen across Portugal and with our fridge struggling with the heat we headed back up towards Spain stopping off at Barril de Alva for the night, but when we arrive there it’s sweltering, the shade doesn’t help, it’s uncomfortable being inside and out, so there’s only one thing for it, a cold shower outside that temporarily cools us down.

We have only experienced a few days of this indescribable heat but it’s given us an understanding of why the locals fear the summer months that potentially bring fires and the sound of the bombardier’s sirens echoing across the valleys.

To bring our 6-week stay in Portugal to a crescendo, we are up early to beat the sun and travel along the N17 then turn off to join the IC5 where we decide to spend our final night in Miranda do Douro. Well known for its lively and colourful folklore it’s a little quieter when we have a walk and with Celtic links, there’s no sign of the bagpipes playing today.

It’s been a long day and the heat has got the better of us in the last 24hrs so we sit with a view towards the Spanish border that we will cross tomorrow.

Portugal has been an experience in more ways than one, it’s seen us wandering and debating over things we probably didn’t need to, and I’m sure if we could have heard ourselves at times we would have been in despair, you live and you learn so they say.

Most of the locals have been friendly, hospitable welcoming people to us foreigners and if you spend enough time here you start to understand some of the Portuguese quirky ways; they get their vegetables from eating soup, and cash is the preferred method of payment, (the number of times we have had to visit a cash machine) and they love a luke warm coffee!!

There’s a quote “ Porto works and Braga prays, Coimbra studies but Lisbon plays” which seems to be very true however it’s not just Lisbon that plays Portugal knows how to party and I am sure we will return one day to party too with it without the motorhome.