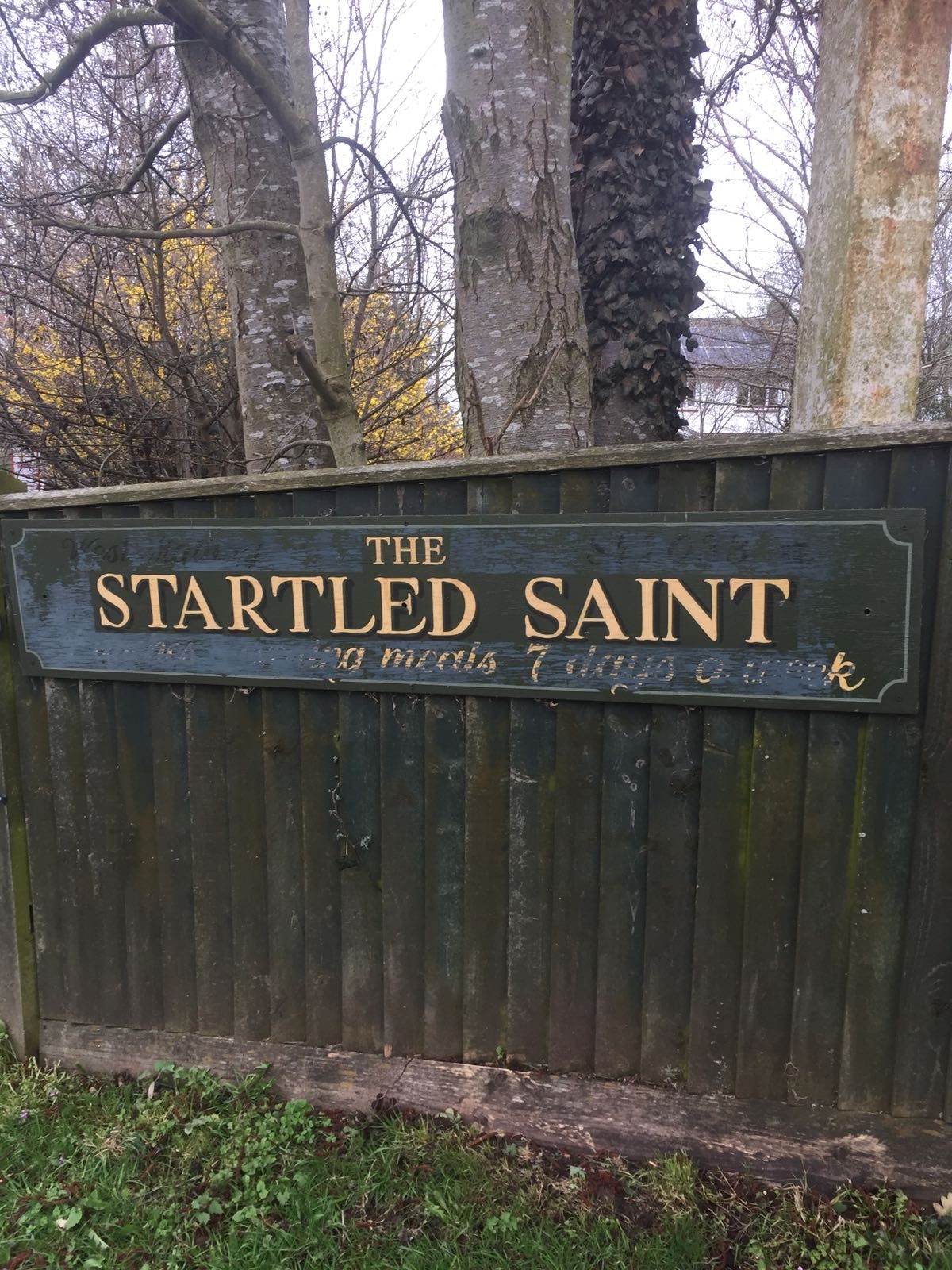 We know what your all thinking “ we’re going travelling” they said, and yes shortly we will be venturing further afield but for the last two weeks we have been staying at The Startled Saint in West Malling roughly five miles from our home.

This opportunity arose after we registered with Trusted House sitters, a site for people looking to either house or pet sit. It’s a great concept for people looking to travel, their systems and security checks ensures genuine references and reviews, safe –guarding both homeowner and house sitter. So this particular housesit gave us the opportunity to be near home if there were any last minute things we needed to sort out. It also meant we could catch up with family and friends and Amelia our granddaughter could give her approval on the motor home.

Once a pub its now the home to Richard and Pauline who entrusted us to look after the beautiful Amber ( Chocolate Labrador ) and Boots the cat for just over two weeks. We had met them a couple of times before which gave us a chance to know each other and to find out what was expected from both parties and what requirements the animals needed.

The day we arrived at their home they had already left for the airport. So you enter someone else’s home that you know very little about, and it’s a rather strange experience well at least for me, John tends to have a different take on things so it took me several days to settle in but Amber and Boots soon kept me busy with their daily routines. Amber enjoys a stroll along the lane and some days Boots would join us, never having had a cat this was something new to me.

The house itself is lovely and set in its own grounds with electric gates, John loves them if we had a big enough drive I’m sure he’d have them installed! The house actually looks older than it is and you get a sense that it as many a story to tell. It’s claimed by the original landlady, Alice Baker that it was opened on the day WW2 started in 1939 and the pubs most famous customer was Wing commander Guy Gibson who led the famous Dam Busters raid in 1941. If only walls could talk “As the saying goes”.

If you walk it’s just over a mile into West Malling its self, which is a pretty little market town that has lots to offer – from Relaxing walks in its parks to historic landmarks, great places to eat, and even a connection with The Beatles. It’s interesting that we have lived less than ten minutes drive from here most of our lives but knew very little of its history so it was interesting getting to know the area.

On the way into the town it’s hard to miss the ruins of St Leonards Tower it’s situated just before Douces Manor on St Leonards street. Nobody knows what the ancient structure is for but the most popular theory is that Gundolf, the then Bishop of Rochester built it as part of a castle. Shortly after you will find Manor country Park which was once part of the Douces Manor estate the manor its self now converted into flats sits opposite. It’s a nice stroll around the lake where you can watch the ducks and swans swimming.

Once into the high street you notice there are several Blue Plaques, they are in memory of famous pilots who were stationed there, the painter John Downman, George Orwell who once stayed in the work house but the one that surprised me the most sits on the unassuming kebab shop wall. It commemorates the day the Beatles filmed the beginning of their Magical Mystery tour there in 1967.

One of the many blue plaque

So this afternoon we will be on the move, which could be somewhat of a challenge after the luxury of the space we have been used to in this lovely house. The last two weeks have gone really quickly. We have thoroughly enjoyed our time here and will miss our walks with Amber and Boots. What we have learnt, is that people still are capable of trusting one another so a BIG thanks to Richard and Pauline.