From scenic France, to Northern Spain 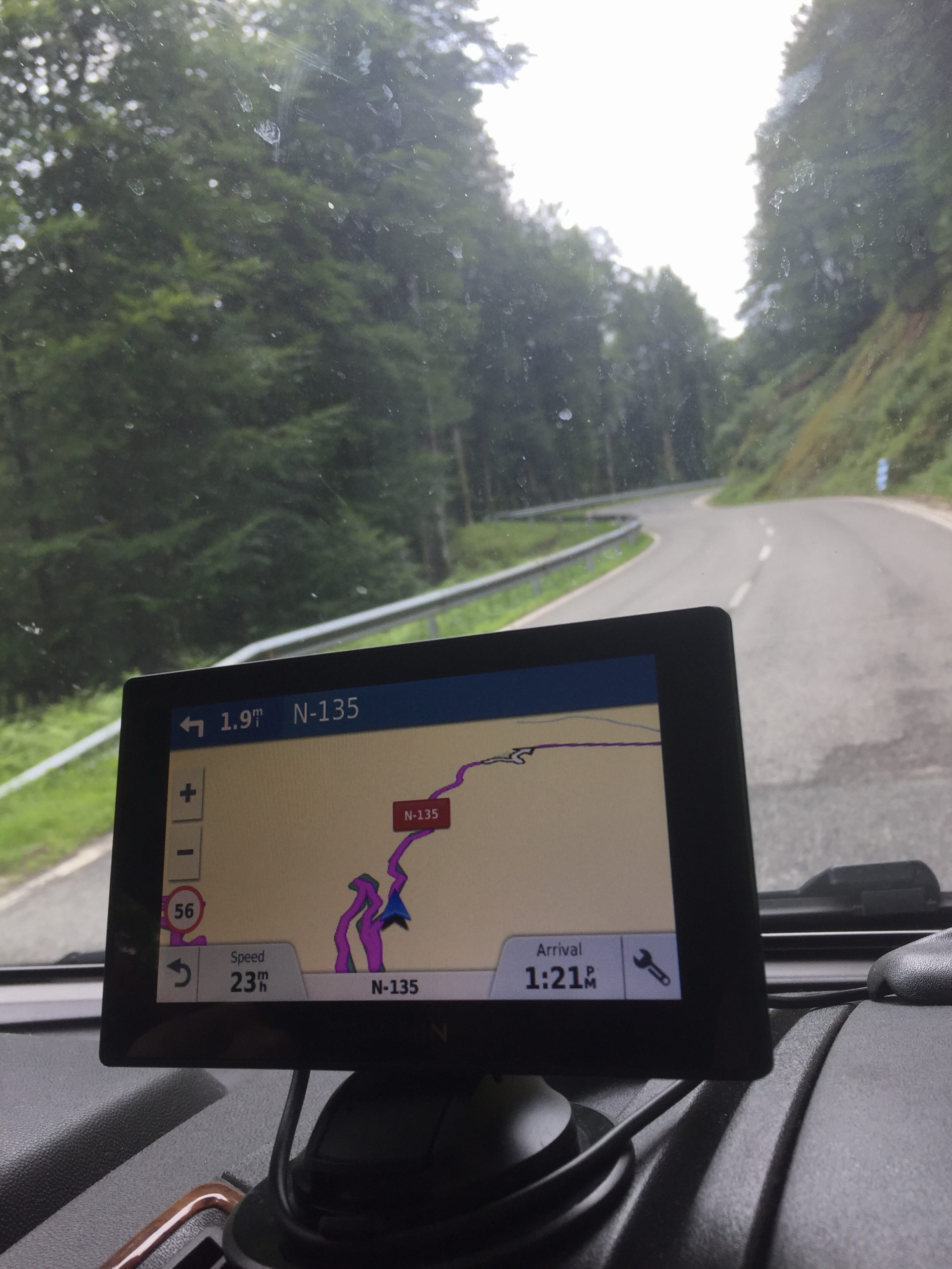 As we leave France for the time being and head towards the Spanish border. We are met with a roller coaster of scenery. At times the narrow winding road goes up and down through green mountain pines. It’s hard at first to believe we have crossed the border. But it ’s not long before the snowy topped mountains become dry, arid  Rocky Mountains the contrast is fascinating it somehow takes you by surprise.

Pamplona is our first stop in Spain, we arrive at the San Fermín festival is being held. The 400-year-old festival dates back to the 13th century,  takes place over 9 days and includes “Running with the bulls” or “ Encierros” in Spanish. Traditionally, the bull run was used as a way of getting the bulls from the outskirts of cities into smaller towns but today I feel it’s just a way of attracting tourists.                                                 Thousands of people risk their lives each year doing the run. It takes place every morning over 8 days along a 930-yard street course straight down into the bullring.

Once the race is over the bulls face matadors and almost certain death later that afternoon in the bullring.

So after parking at the aire which is right in the centre, we have a walk up to the old town which is a sea of red and white the traditional colours worn by locals and participants during the festival. It attracts thousands of people and this year is no exception, it’s heaving. At times I found it to be wild and overwhelming, so if like me you don’t like crowds stay away. For me, it looked like an excuse to get drunk.

John decides he would like to watch the bull run the following morning, so we try to get an early night but that is very short lived. A very drunk Spanish man at 4am starts banging on the side of the motor home. At first, we ignore it but after he repeatedly does it, John tells him to feck off. He then continues around the site  banging on other motorhomes now telling them to feck off!

John leaves just before dawn to find a place but soon realises that from the ground level he probably won’t get to see anything. You can pay to stand on a balcony which normally costs €150 per person including breakfast ( coffee and croissants) after negotiating John gets it down to €70. This is nearly all of our budget for the week so he lets me know by text, this is  like waving a red rag to a bull!!

The run this morning takes just 8 minutes, I’ll let you do the maths of how much per minute this as cost for John to watch.

John thinks the atmosphere is great and is pleased he went but the run it’s self dangerous and silly.

My views are different. I don’t condone this sort of thing so I walk up to the village after it as finished. I think it’s a disgrace that it even takes place. To me it isn’t a test of nerve, it’s a display of cruelty and idiocy, there’s nothing honourable or courageous about taking part. It’s the tourists who keep the bullfights alive and the bulls dying. This year 28 people were injured 2 of them gored. I found it quite satisfying seeing some of them lying on the floor or being carted off by ambulance. Hopefully, they have had a taste of how the bull feels.

I’m sure if we come here again this city would have more to offer, maybe we will return one day.

By the time we decide to stop at Burgos, we are both tired its been a long night and day so far.

We park in a large carpark used for motorhome stopovers, it doesn’t look much but as long as we get a good nights sleep we don’t care.

Once the rain has stopped we walk along the river Arlanza into the town, it takes just over half an hour. Narrow laned cobbled streets lead you to beautiful architecture. The  Casa de Miranda, which houses the Burgos Museum displays an important collection of archaeologic artefacts and Casa de Angulo, which houses the Museum of Fine Arts are both impressive buildings. However, the Casa del Cordón, where the Catholic Monarchs received Christopher Columbus after he returned from his second trip to the New World is interesting too. For me, though it’s the cathedral, declared a World Heritage Site by UNESCO.

With its filigree work in the spires of the towers and in the exterior of the High Constable Chapel, it’s a beautiful cathedral.

It starts to rain again so we head back to the motorhome. Earlier there where only 10 vans now we can’t see the other side of the car park there’s at least 50 now with more still arriving, its a popular stop.

Zamora stands on the banks of the river Duero. Famous for its Romanesque monuments there are two that I think are worth visiting.

The castle sits on the edge of the city, with its Arab origins it still as it’s original keep. And the cathedral that has three naves, a transept and three semicircular apses. Its dome base with 16 double arches supports the scaled dome, which is the symbol of the city of Zamora this is what differentiates it from other cathedrals.                                            Apart from a local wedding its quiet in the old town for a Saturday afternoon. So we sit at a bar in the square and have a drink. We are told that there’s a rock concert taking place outside the cathedral so later that evening we wander along. We are unsure of who the bands are or what they are singing, but it’s a mix of old and young Spanish that come out to watch and join into the stomping beat of the crazy loud music.

Whilst in the area not far from Zamora is Lago de Sanabria nature reserve, home to the largest lake in the whole of Spain which is definitely worth a visit.

Apologies for not many photos internet connection isn’t great so will upload as and when I can but for now we are off in search of somewhere quiet.

6 thoughts on “From scenic France, to Northern Spain”