Heading North through the Dordogne, Charente and Nouvelle-Aquitaine 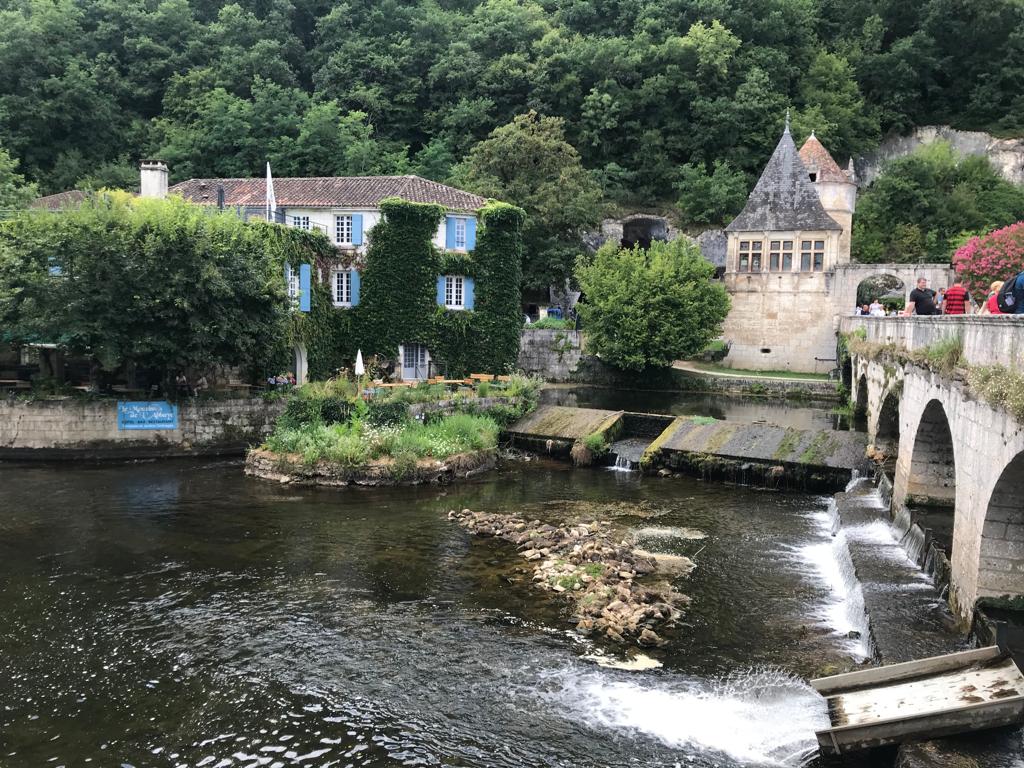 After 4 days of being parked at the side of the road with our travelling neighbours, we are now going our separate ways so we say our goodbyes and head back to Gramat to use their services however there’s already a queue of motorhomes and with tensions rising amongst those already there we head along the windy, twisting roads to the village of Le Vigan where we are the only ones. After filling up with water and emptying the waste we move further North into the Dordogne visiting old and new villages.

Having been to Gourdon before we knew we would be able to get some shade under the trees and at night it’s quiet. Being a Sunday there are few people around but when we walk into the village for a drink and get chatting with the barmaid she tells us that since covid things haven’t really picked up here, and lots of places in the area have since closed.

Awarded the label as one of the most Beautiful Villages in France, the bastide of Monpazier dazzles with its exceptional character, and even though we have been here several times before we still enjoy a walk along its narrow streets and alleyways, wandering under its arches.

The one thing that has changed is the location of the motorhome site, now tucked away behind the fire station it’s in a much better position, with more space and we can sit outside.

Passing places we have spent time in before it’s good to see that very little has changed to the landscape.

The last time we visited Bramtome it was late October and there was hardly anyone around, but today it’s full of tourists like us so you get a different feel, we walk some of the other roads leading out along the river where it’s in the shade.

Leaving Bramtome we spend the morning grocery shopping, filling up with diesel and LPG, all this spending is giving John palpitations, but I’m sure a glass of red wine later will ease the blow.

Having stopped at several places today already it’s getting late as we enter the Charente department so we park up next to three other vans in the village of Massignac. Walking around the village doesn’t take us long and despite being inland the area is dotted with lakes so plenty of opportunities to find shade and cool down.

France is such a vast country so when we say goodbye to people we meet along the way we all normally take a different route so it’s quite a surprise to come face to face with Phil and Michelle on one of the back roads,  so as the saying goes when in France do as the French do, so we stop for a chat by side of the road.

Just outside of the village Saint-Quentin-sur-Charente is Lac de Vacaud where we spend the night with half a dozen other vans. Once again the temperature has risen and it’s too hot to do much, so we potter John fixes a loose part on the door, whilst I sort and clean inside. With a constant flow of people coming to fish or to have a picnic, it’s a popular place. Just before the light fades and we are plunged into darkness with just the light from the toilet block giving us our bearings we go for a walk along the lake but being by water as its pit fulls, there are flying ants and mosquitoes everywhere and we continue the game of squatting them once we are back inside.

We haven’t left Saint Quentin when John hears a noise. And to be honest, at first, I didn’t take much notice because he’s always going on about the slightest rattle, and I normally just turn the radio up but this time it’s a grinding noise coming from underneath the motorhome.

Pulling into the aire at Chirac John tests the brakes and it seems that they are the culprit of the grinding so the next couple of hours is spent tracking down a garage.

Most are closed for lunch or don’t exist anymore but finally, in the village of Gencay, we find somewhere that’s open and able to take a look. Quickly they confirm it’s the brake discs but we aren’t surprised after the number of miles and terrain we have covered. Being as it’s a Friday and the parts need to be ordered, we will have to return on Monday afternoon for the work to be carried out.

Not wanting to drive much further we quickly look for somewhere nearby to park for the next few days, unfortunately, the aire in Gencay doesn’t have brilliant reviews, and we would quite like a peaceful night, so we end up 6 miles down the road at Chateau Larcher. Crossing the narrow bridge to find the aire it looks like we have arrived just in time, there is only one space left. Next to a lake and a lovely park, it’s a great site and it’s just a few minute walks into the village centre to have a wander round.

Monday morning has arrived and like us, most people are packing up to move on, but we aren’t in a hurry as we don’t need to be at the garage until this afternoon. We have enjoyed it here albeit at times it was a little rowdy but it’s always good to stop for a few days without having to make decisions on where to go or stay.

Anyway it’s time to head into the garage to get these brakes sorted and even though we always try to speak the language of the country we are in as much as we possibly can, we don’t always do it that well, so with his phone to the ready and translator on standby John heads into the garage, however, the translator doesn’t always get it right either. When John asks it to translate “may I ask you to look at ” he soon realises something isn’t right from the rather puzzled look on the mechanics face and discovers it as translated to “look at my arse” well at least the mechanic found the funny side and it gives us all a laugh.

In recent months we have spent a fair bit on our motorhome so today has been like pulling teeth when John has to get his bank card out again, so I think I will wait until we are back in the motorhome before I tell him our next stop is the supermarket because by tonight I’m sure he will need a box of the red stuff this time.

Coordinates for Aires used in France