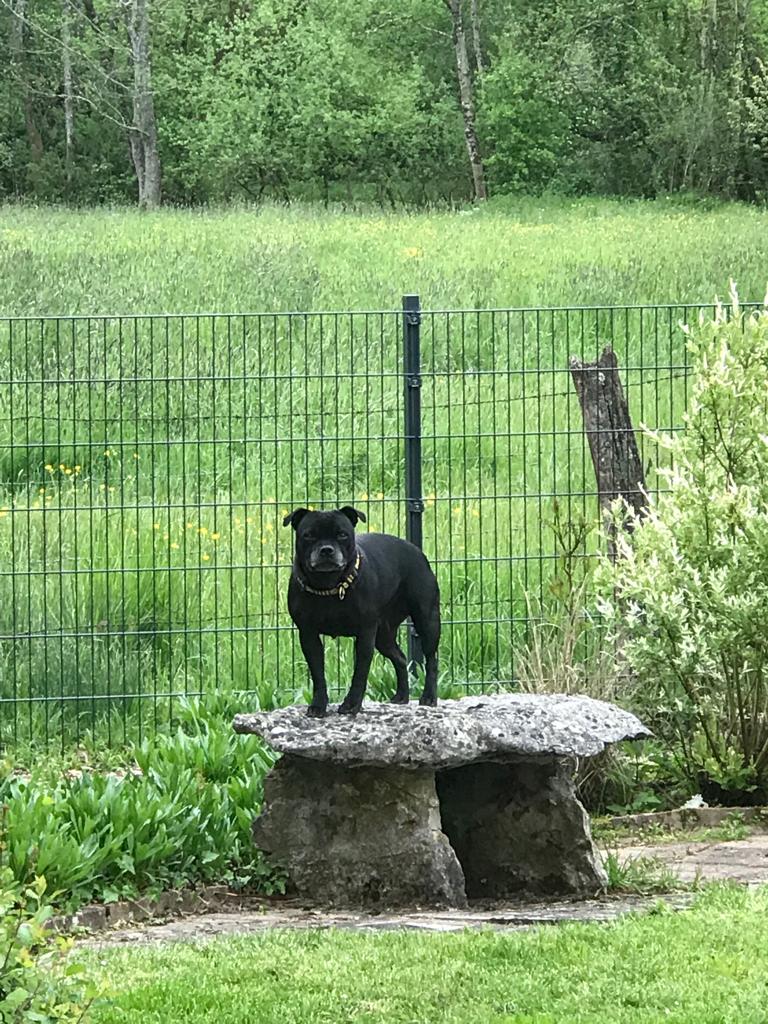 Villersexel is located in the Bourgogne Franche-Comté region of France. It’s a short drive from here to the small village of Saint Sulpice where we have been house sitting.

It’s a pretty village with beautiful old houses and imposing farms. With its neo-Renaissance church being rebuilt in 1863 following a fire and the discovery of a Roman villa on an area of ​​more than two hectares it’s sure to be steeped in history.

It’s finally stopped raining as we are greeted by Cornelia and her Staffordshire bull terrier, Idouy and her 3 puppies.

Set in a lovely garden stands a ‘Sanois style’ typical old farmhouse. Surrounded by only farm fields where the cows wonder daily and just a couple of neighbours, the nearest shops are about a 3-minute drive in the village of Villersexel.

Idouy is 6yrs and the puppies, Phantom, Phalaux (boys) and Phini. Only 11 weeks old, we are up just after 6 am to let them out and give them the first feed of the day. They are really sweet, lovely dogs who love each others company. Full of energy and would follow us around the garden.

Each morning we drive them a short distance to walk around country lanes near the village of Villafans.

John would drop me off first with Idouy, then park further down the lane. He would then join us with the puppies. Being on leads is all rather new to them, the boys trot along but Phini is lazy she wants to be carried.

It’s here whilst walking down one of the lanes we find the American memorial. Apparently shortly after the war had ended in 1945 an American plane crashed killing all nine of its crew.

Over the week we make a couple of trips to Villersexel.  Phantom one of the pups needs to be seen by the vet. John needs a hair cut but decides not to let me loose with the Clippers this time, so he visits one of the local coiffures. And we couldn’t resist nipping into the local boulangerie for some fresh bread and cakes.

Labelled small town of character, Villersexel was mainly illustrated in history by the battle of the same name. The latter took its place in 1870, during the Franco-Prussian war and resulted in the victory of the French armies over the Prussian ones. The history of the town is also closely linked to that of its castle, built in 1871, then rebuilt after a fire at the end of the 19th century. Visible as you drive towards the town the Grammont chateau is a creepy looking Louis Xlll style building.

The area has three classified areas of ecological, faunistic and floristic interest, particularly around the Ognon valley, all perfect for walking.

Even though the weather has been awful and this house sit has been more responsibility we have thoroughly enjoyed it. The house is beautiful, in a peaceful location. We have enjoyed looking after and walking the dogs. I think one of the best parts of house sitting has to be the pets. With our current travel lifestyle, it’s difficult to have a dog of our own, so we love that we can be in the company of someone else’s while helping them take their holidays stress-free.

And as for Cornelia, she is absolutely lovely, full of life and fun, it’s been a pleasure meeting her. So we would like to say a BIG thank you to her for allowing us into your home.