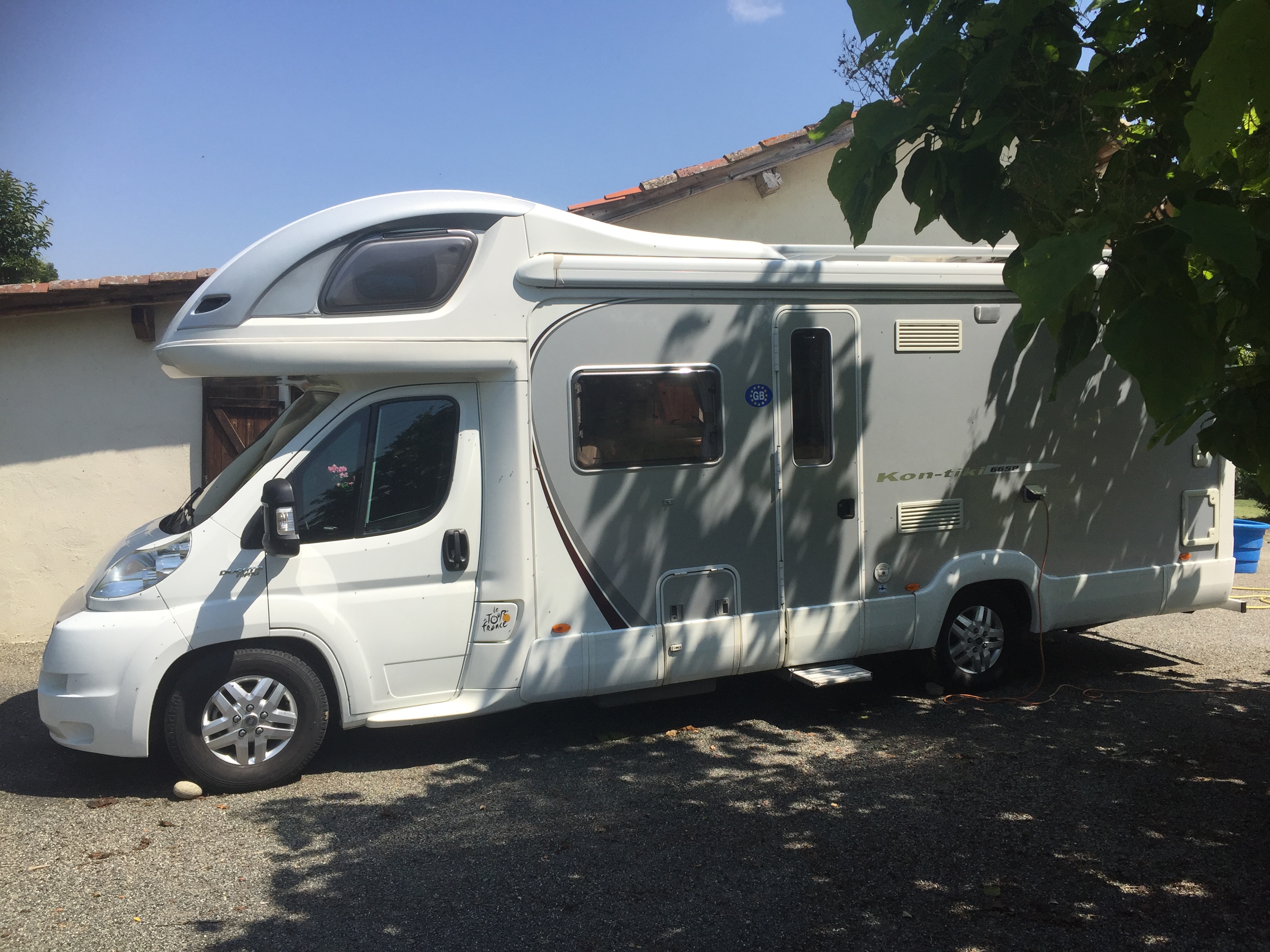 When I started this blog, I wrote about a house being a home so why couldn’t a motorhome….well, it’s been nearly 3 months now and there have been a few teething problems.

Motorhomes come in all shapes and sizes. Ours is a swift Kontiki 665p with a 2.3 Ducato engine. It’s a six berth, fixed French bed at the rear, a double in the overhead cab ( Home to Johns racing bike) and the settees turn into another double. There’s a washroom to the rear with separate shower. Full-size oven, microwave and fridge with small freezer compartment. This all runs on electric or LPG, there’s also solar panels to top the electric up ( if there’s enough sun). So practically everything you would find in a house. I think it’s more than adequate for us if not a little to big for just two people. John would beg to differ,  I’m sure he’s had a bit of motorhome envy at times.  It doesn’t matter how good your motorhome is, there’s always someone with a bigger and better one. The one that pulled up alongside us tonight, looks like it’s come straight from  ’Meet the Fockers’ film set.

Motorhomes are bigger and generally more difficult to drive than a car so John is doing all of the driving at the moment and being as it’s a left-hand drive I think he waiting until he finds a big empty car park for me to practice in!  And after watching numerous people attempt to park them you soon realise why big mirrors and reversing cameras are a must or a wife shouting ”back it up, you got loads of room”.

It wasn’t until we started travelling and I watched John drive throw narrow villages, steep hills and tight car parking spaces that I realised a good deal of care needs to be taken. It isn’t just the overhead you have to think about the undercarriage is equally important to especially when approaching speed bumps as we have found out several times.

The day to day living is much the same as a house you just have to be a little more organised. Its a minimalist way of living and I have learnt that I don’t need to possess lots of things. All be it at times it seems like we are roughing it! Not that this is a problem for John, he had this notion before we left that he only needed a pair of shorts and a t-shirt, basically the clothes on his back. And I must admit there have been days when it’s been cold and wet we probably could have passed as a couple of tramps!

Regularly used items are stored in easy to access cupboards things rarely used stored under the bed and seats. Which makes cleaning easy, the entire inside can be cleaned within an hour.

We have a TV and satellite dish which John as to put up each time we want to watch it. So unless we are in one place for several days we don’t bother.

The sleeping situation is something I’m not sure I will get used to either. For the last 16yrs or so we have shared a super king size bed and now having to adjust to a 4ft 6 is somewhat of a challenge. Showering in a confined space with limited water can also be tricky, you learn to just wash the crucial parts!

So, If we were ever looking to buy a new motorhome there are a couple of things we would change; An island bed, that way you won’t disturb the other person if you get up in the night and ann 80inches Automatic satellite dish if we were planning on going abroad.

Living full time in a motorhome can be challenging at times you lose your own personal space. We now live 24hrs a day, seven days a week together something we have never done apart from holidays. Over the years we had been in a routine, going out to work, looking after the boys, just general life really. So day to day we would probably only spend a couple of hours together. So I  think we have adjusted well, we have our favourite places to sit, there are more discussions, and generally just settled into a routine.

Travelling for an extended amount of time was something I never thought we would be able to do or at least until we retired. Unfortunately, we haven’t retired yet and will have to return to work at some point but its given us an insight of when we do. What I have realised is its work you actually retire from, not life. So for the moment we are making the most of this exciting opportunity and learning not to drive each other crazy!