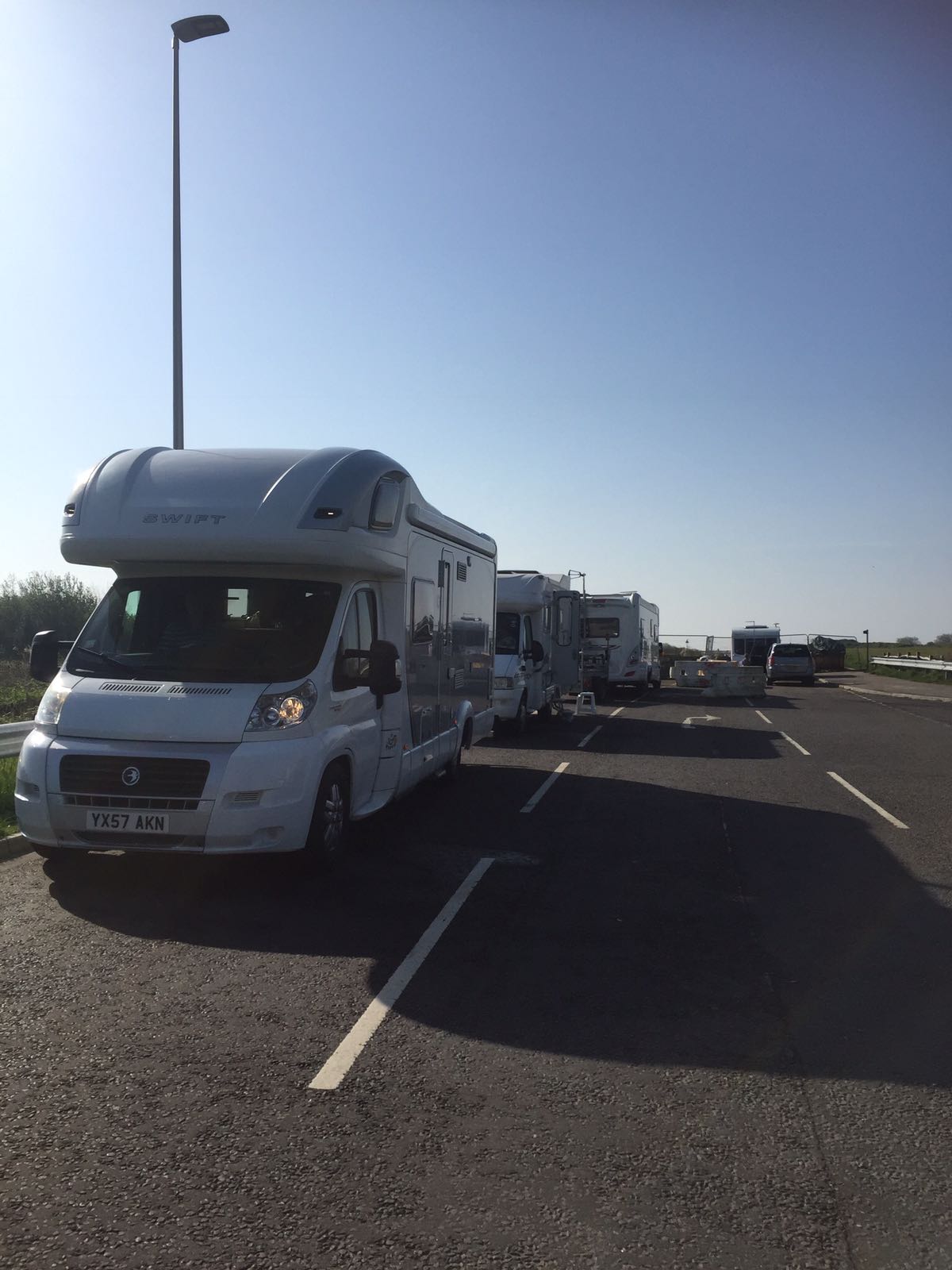 Bath is our next stop off and we find a large park and ride in Lansdowne road which we can stay in overnight. The bus ride into Bath centre is about 15 minutes and costs £6 for the two of us that includes parking overnight. We decide it’s probably the last time we were going to be in a large town before leaving for France so we take the opportunity to inform banks where we are going, change up Euros and get any last minute bits we want before we start sightseeing.

It’s our first visit to Bath and it’s beautiful, all of the buildings are so grand. It’s still early morning when we get into the centre and it’s already busy. We take a walk to see `The Circus` an historic street and just round the corner we find `The Royal Crescent` which is possibly the most famous piece of architecture in the city, you expect Mr.Darcy to come strolling down the street any minute! The queue for the Roman baths is huge so we decide to give it a miss and walk down to the river Avon to get an ice cream and watch the world go by.

We return to the car park for the evening and are joined by a French couple in their motor home it’s good to have company in such a large area. Alongside us is a large playing field which seems really popular dog walkers, children playing football and even a chap flying his Para motor which gives us entertainment for the evening. We then get an unexpected visit from Chay who has just finished work and is passing on his way home so a nice end to our time here.

Parked up along side the playing watching the    Para Motor

We have only stopped at a couple of places for a very short time in the last few days. Selsey Bill is one of those places. I have memories of the area from when I was younger, so interesting for me to return. In the late 70s early 80s we had several holidays here one being at a town house in Kingsway road, it looks much the same as I remember. The play area is still there, all be it bigger and the addition of a cafe seems popular.

Selsey is still very much a traditional seaside village, with the main high street offering an array of shops, restaurants and souvenir shops, not much has changed except the Lifeboat station has since been relocated its now not far from Kingsway road a much large building than the one I remember.

I remember Sir Patrick Moore the Astronomer and TV presenter lived at The Farthings on the edge of the village. You were able to see his telescopes in the garden but In recent years the musician Brain May had bought the property and allowed Sir Patrick and his beloved cat Ptolemy to live there until his death for a peppercorn rent after he fell on hard times.

Farthings once the home of Sir Patrick Moore

It’s been a taxing few days since we left Selsey. It was far easier to find somewhere in the Welsh area to stop over for the night. From Selsey to Newhaven there are plenty of sites but they were either full or not open. Several places we tried from ` Search for sites` were no longer allowing people to stay and the others it directed us to we didn’t feel safe.

We have done some stupid things in our time, but even we thought Bang smack on Brighton sea front on a Saturday night is not the place to be in a motor home! Fortunately, that is the beauty of a motor home you never have to stay in one spot for any longer than necessary.

So we opt for the Traveller site at the back of B & Q in Newhaven!! We are a couple of caravans / Motor homes away from them but we can still hear the noise from them arguing, their generator going and their dogs barking, it goes on into the early hours. It was late and dark when we stopped last night so the view this morning is not what we are normally used to. But the arrival of a rather tanned bloke (and it definitely isn’t John) who looks just like he has stepped out of the diet coke ad, in just a pair of Lycra shorts and sporting a six pack helps improve it! He clearly isn’t from this community.

We say good morning to our neighbours who don’t seem to mind that we turned up late, unannounced. They seem pleasant enough but who are we to judge, John and I are nothing more than a pair of vagabonds ourselves but for now at least he hasn’t got me carving clothes peg and selling lucky heather yet!

Our ferry is due tomorrow but we head to the port this morning to see if we can change our booking for today we don’t fancy another night at ` Chez traveller site’. We are in luck there is space on the 1.30 ferry so we join the queue ready to depart.

At The Docks Waiting To Board