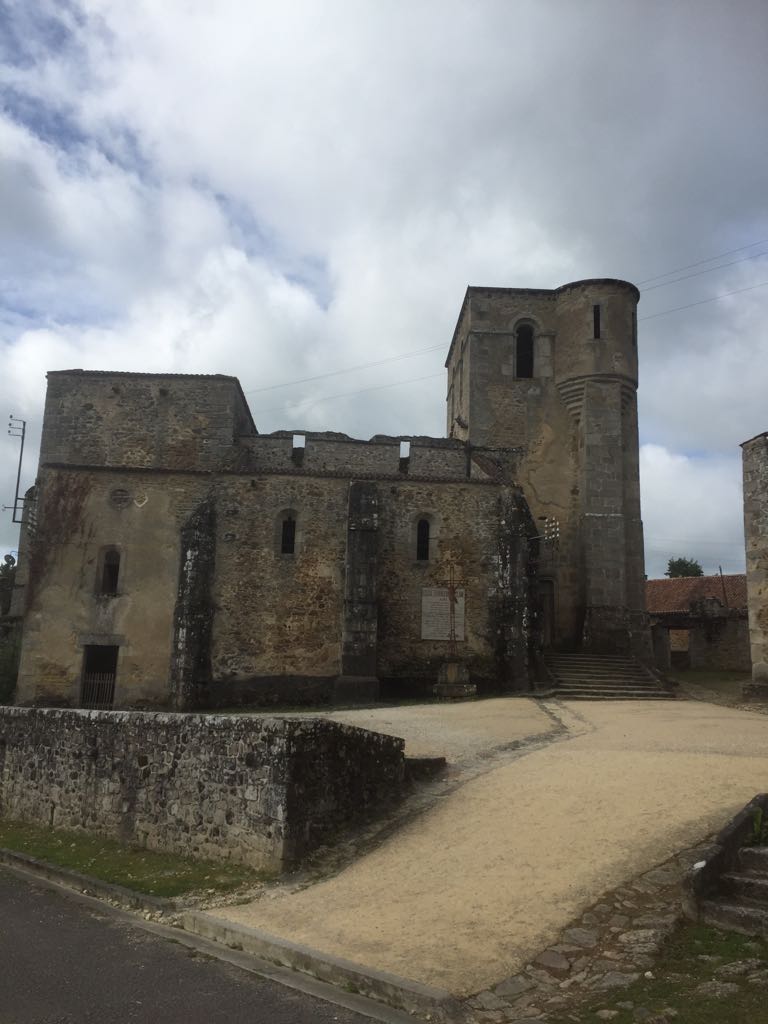 Oradour-Sur-Glane is a village and memorial site northwest of Limoges. I first became aware of the site whilst searching for interesting places to visit in France. I have never really been interested in war but since we have been here and seeing a memorial in every village and town it starts to make you wonder. So if you are not interested in war or history this blog will not resonate with you but for me, the visit to this town will always be memorable.

The tragedy that struck Oradour-Sur-Glane happened within a few short hours. On June 10th 1944 during world war 11 and was carried out by men from Der Fuher Regiment of the 3rd Waffen SS Panzer Division, Das Reich. A total of 642 villagers, men, women and children were rounded up in various points in the village and murdered, then set on fire. One woman and five men emerged from the slaughter. When General de Gaulle visited the scene. He wanted it preserved, so that further generations might see, realise and never forget where such evil folly may lead. So the town it’s self has been left as it was during the attack.

We arrive at the memorial site just after it opened at 10 am and there are a few people already there but as you enter the town it seems very quiet and lacks any wildlife as if they are aware of the tragedy that occurred.

The well were the troops tried to hide human remains

As you wander through the streets of the town you can imagine it was once a lovely French town where people all knew each other. The layout resembles many a French town we have passed, except that Oradour is still, lifeless and somewhat haunting. Twisted walls that give no one protection, electricity lines which no longer have a purpose and tram lines leading to nowhere. Some of the buildings are labelled so you can see what they are. There are plaques in various locations which confirm where people died or lived in that particular house. In one house the kettle can be seen in the fireplace with its tiled surround, in almost every home there are the remains of a sewing machine and on the street corner stands a lonely old car. It’s immensely sad and unimaginable what must have gone through their minds that afternoon.

One of the many sewing machines that almost ever home had

The village was rebuilt 9 yrs later just a short walk from the site. Today, Oradour-Sur-Glane is a big village that has met the challenge. Two thousand people now live there and life has returned to normal.

Inside the church where the women and children were murdered.

There was apparently never any rhythm or reason for this act but it makes you realise just how many people suffer from savage cruelty which springs from intolerance, be it religion or politics.

Since visiting the site I have read the book `The Tragedy Hour by Hour` by Robert Hebras he was one of the survivors from Laudys barn. After many years of silence, he gives an hour by hour account from 8am on the Saturday morning. Robert was 19 yrs when it happened his life collapsed in a few short hours, he lost everything, his family, possessions and every trace of his past. He tells of the agony and torment suffered by the victims. An interesting book it gives a first-hand  account of what life was like before, during and after the attack.