Our adventures in Portugal, part 1 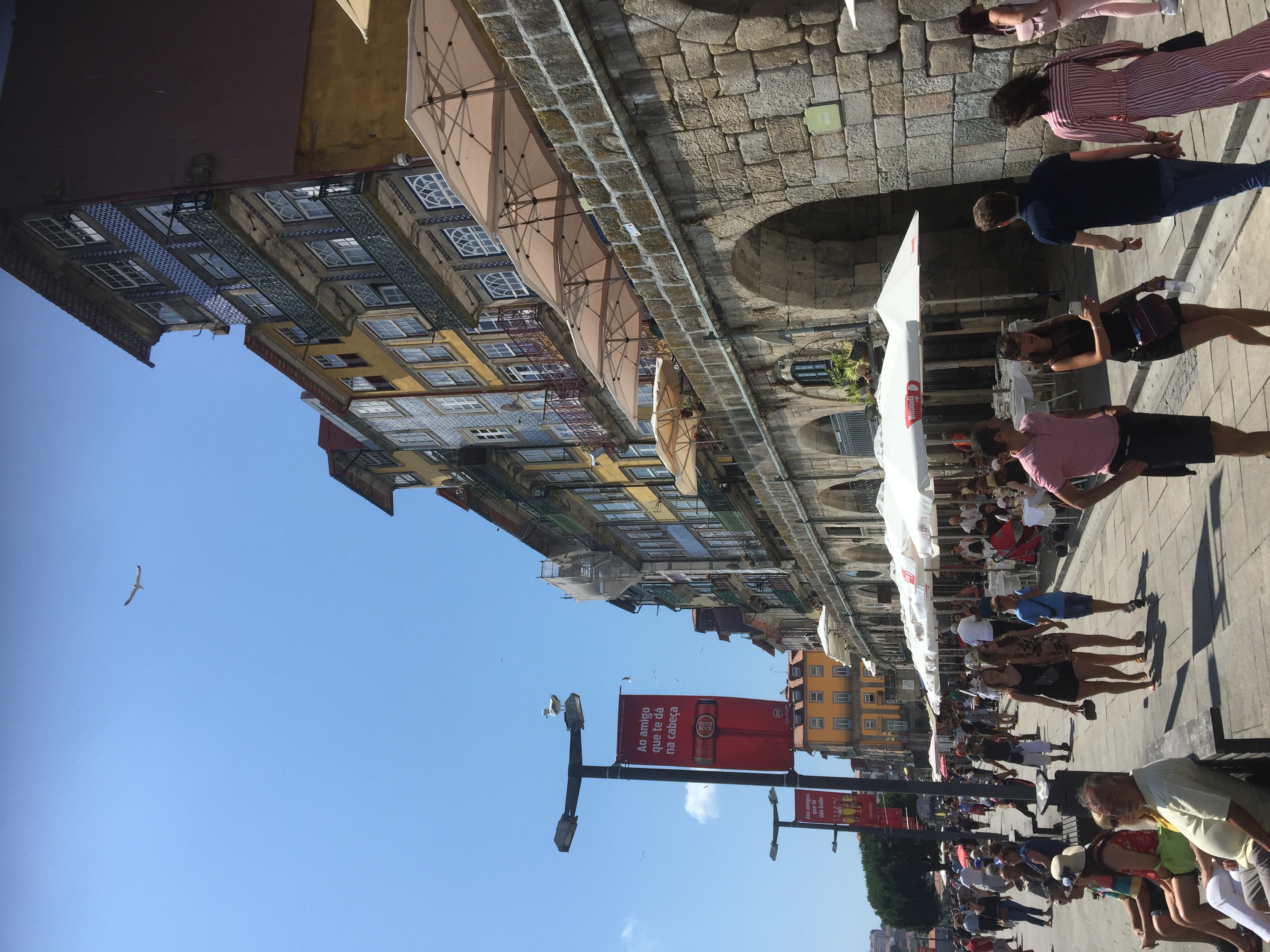 Our first stop in Portugal is Porto located facing the Atlantic Ocean It is a historic and varied city, that has a warren of cobbled narrow streets. Famous for its port, which is still stored and matured in vast cellars that stretch along the banks of the Douro river. Being a weekend it’s extremely busy so we sit at a bar and watching the world go by. Teenage boys are jumping off the bridge for money, whilst 2 women have a set to about driving over the bridge, its comical to watch everything stops.

The aire we are staying at is busy with people from all walks of life. Some sit outside of their vans playing their guitars and bongos late into the evening, there’s a fortune teller next to us and Liam the rescue Boxer dog sits watching the comings and goings of the site. Parked overlooking the Douro river with lovely views of the city, boats sailing by and a helicopter landing opposite we can’t believe we can stay here for free.

This morning we drive along the coast where fisherman are just returning with their catch and local women are doing their laundry at the communal washroom. Furadoura is where we stop, a small village relatively unspoilt with extensive sandy beaches backed by a long stretch of pine-fringed dunes. The forest here runs for miles so we decide to go for a ride we manage 8 miles before the heat gets to us and we return to spend the afternoon on the beach.     Every day there’s the opportunity to meet new people today its Keith and Jeanette who are also travelling in their motorhome. Some people have had an interesting life, none more so than Keith a musician who clearly as a sessions list that reads like a who-who. We have had a lovely evening chatting about our adventures, let’s hope there’s many more.

After saying goodbye to Keith and Jeanette. It’s ‘cabin crew to doors’  once again, our term for crossing checking that everything is secure, shut or turned off before we start moving.

We head to Costa de Lavos it’s a small quiet village with along stretches of white sandy beach and a handful of shops.

The aire is quite full when we arrive but we find a space next to Craig and Christine. like us, they have been travelling for a while now. They designed and built their camper van over a couple of years. Inside it is unique and cosy with a real personal feel. Every nook and cranny is used to utilise the space it’s well thought out. I don’t have any photos of inside this van but they rent out another one at www.quirkycampers.co.uk We exchange places of interest before moving on.

We drive around the coast not really stopping off anywhere today until we come across Foz do Arelho. It is a lovely place, to one side there is large sandy strip to Atlantic Ocean and the other side is the tranquil waters of the Óbidos Lagoon with its warm salty waters. where we are staying resembles more of a traveller site but it’s friendly enough. The chap at reception tells me if we stay one month he will teach me Portuguese and hands me a loyalty card if we stay 10 nights you get on free.

We park next to a Dutchman who refers to John as ”English man” when we can’t get the electric to work. European hook up isn’t something we had come across before.

Apart from walking along the beach in the evening thankfully we have a quiet peaceful night.

Not far from where we stayed last night is Obidos. The fortified town is one of the most picturesque locations I think in Portugal. It as a certain charm, from the narrow cobbled streets, the quaint houses, through to the imposing medieval castle, which once guarded the region. We park near to the aqueduct which was constructed in the 16th century to transport water into the town.

It’s a short walk passing the main gate that contains a beautifully tiled chapel that overlooks the main thoroughfare. The blue and white 18th century glazed tiles, called Azulejo, depict the passion of Christ while the ceiling represents the crown of thorns.

I was surprised to find the village is trying to get some kind of literacy status. So for book lovers, it’s a dream, the old wine cellar and church have been turned into bookshops, second hand and new are sold, I could spend all day here.

Books at the Alter

The town’s walls completely encircle it but it’s only possible to walk certain parts. So on our way out we decide to have a look. there are wonderful views over the terracotta tiled roofs and white painted houses across the town but is only for the confident as there are multiple trip hazards and almost no safety railings. I’m pleased once we are back down and heading in search of somewhere to park for the night.

After a spending the morning walking around Obidos we stop at the Sao Juliao and decide to spend the night here. This part of the coast is a surfers paradise where the waves are clean and just the right amount of offshore wind.

There are quite a few surfers here, with sun-bleached hair hanging loose, with bronzed bodies and wide smiles perhaps it’s all that vitamin D they get that gives them a glow or is it just their simple life.

It’s a quiet peaceful night here with only the sound of the waves hitting the shore.

We had read how the mystical hills of Sintra with its fairytale palaces was worth a visit. To get to the village we have to take a bus, taxi or Tuk-tuk. we definitely can’t take the motorhome. sadly today they have closed all roads leading there and its to far to walk. So we decide to take a walk up just to where the author Hans Christian Andersen stayed for a while, It’s a small pink house built between the rocks. He apparently said that Sintra was the most beautiful place in Portugal and from the views, we can see he probably isn’t wrong.

Back at the motorhome, we decide to move on and to get out of here it is a one-way system. It isn’t long before we take a wrong turn and are heading up the mountain. With trees overhanging on one side and cars on the other the road gets narrower and narrower. It’s so tight we are barely moving, then there’s a loud bang and a lot of scrapping. John gets out to look but behind us, there are tuk-tuks and cars all bibbing their hooters telling us to move. From what John can see he thinks we have just hit a wing mirror. Once we are back on the right road we stop and have a look, we can’t believe how much damage there is.

Part of the damage

After the events of this afternoon, we stop at Setubal for the night. it’s just a carpark one street back from the seafront but there are other motorhomes. We have a walk along the seafront, stopping off at a bar we need a drink after the morning we have had.

Fishing is clearly a big part of the community as the fisherman are busy in the harbour sorting nets and cleaning boats.

Being as we are in a car park there isn’t much of a view tonight so we spend the evening watching the Portuguese abandon their cars anywhere until we are blocked in.

Parked next to us is a Spanish van its occupants 2 women and a man. It’s not long before the man now topless with a rather wide smile comes bounding up to our window wine bottle in hand asking to borrow a corkscrew. Before John, as the chance to give him the cork, he is gone and the giggling next door starts. We name them Rita, Sue and Bob too.

Surprisingly it’s not the neighbours that keep me awake but people passing by shouting until 5 in the morning, John doesn’t hear a thing. Neither does Rita, Sue and Bod by the looks of them.

After last night we head in search of somewhere quiet but as we enter this village it’s clear that some kind of event is taking place.

We have stumbled upon the world music festival that has been taking place here since 1999. Created with the aim of promoting Sines castle the event illustrates the diversity of musical genres around the world.

Today, the festival stretches beyond the physical boundaries of the castle and is open to folk, jazz, alternative music, fusion and urban music. More than just world music or traditional roots music Sines strives to discover the music of the real world as it is made and experienced in our times, music marked by associations between performers from different geographic and cultural origins.

It’s hard to believe that this festival takes place in such a small village.  Perched on low cliff tops with its whitewashed cottages, cobbled streets and pretty square. We have a walk down to the beach then into the village to watch the concert where we try the traditional drink Ginja (tastes like sweet cherry brandy ) served in a chocolate cup. It’s a fun evening with hippie music, jugglers and a small market.