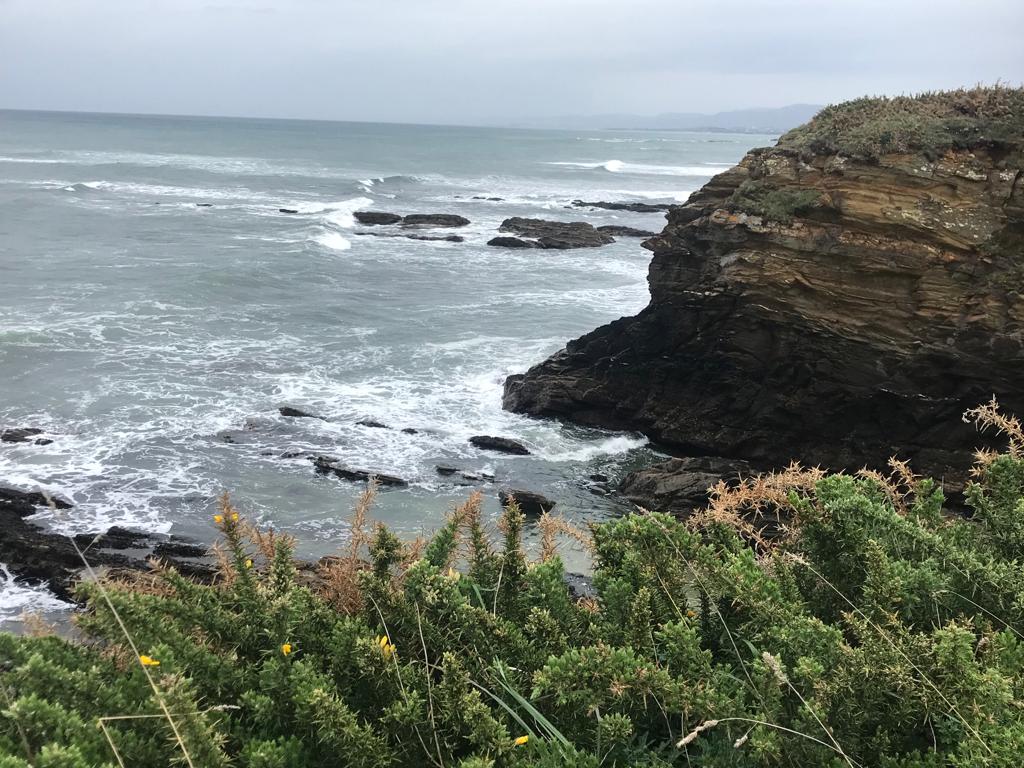 With the Pyrenees to the left and the Basque coast ahead, we pass through Hendaye the last French town before crossing the border into Spain. Served by the Paris-Bordeaux-Irun rail service it’s a hive of activity on Easter Saturday and to be honest, we aren’t sure at what point we cross the border because there are very few signs!!

San Sebastian is our first stop and it’s widely thought to be the prettiest city in Basque Country and it is a beautiful place to visit offering typical Spanish streets and lovely beaches overlooking the Bay of Biscay.

The aire here is just a car park full of vans coming and going day and night but it’s cheap and safe so we stay a couple of days.

The next morning we head to Funicular that’s been clattering up and down Monte Igueldo since 1912, allowing us to enjoy old-world transport, however, it isn’t for the faint-hearted, safety isn’t a priority when boarding!!

Once at the top it gives you amazing views back towards the beach and harbour, it’s a fun experience with plenty of old-world charm.

Moving along the coast we stop at Getaria to take a photo only to be swiftly moved on by an irate Spanish policeman and less than 10 minutes later we are moved on again!!

The designated parking for motorhomes at Zamaia is in the industrial estate about 5 minutes from the town.

We walk through the town via the river down to the beach where we find what is meant to be the longest set of continuous rock strata in the world and you can see why it interests geologists. Known locally as the ‘Flysch’ they  date from the mid-cretaceous period to the present day, a time period of over 100 million years

And if you are a Game of Thrones fan you may recognise this as the beach where Daenerys Targaryen lands with her army when she returns to Westeros, it’s an interesting place.

Parking for Bilbao is on the outskirts so we get the bus into this historic town and at €1.35 each it’s worth it.

Walking along the river we approach the Guggenheim but the first thing we see is the 42-foot-tall West Highland Terrier sculpture by Jeff Koons, known as the Puppy.

Adorned with thousands of plants and flowers, it was originally a temporary installation but due to its popularity it’s now a permanent fixture, it certainly makes you smile.

From the Guggenheim, we head to Casco Viejo, Bilbao’s medieval Old Town to find the original seven streets of Bilbao, it’s some of the oldest and quaintest parts of Bilbao dating back to the 1400s.

It’s worth exploring one of the many boisterous pinxtos bars which are normally full of locals catching up with friends, we go to the one next to the market hall and it’s a hive of activity.

Deciding it’s time to get the bus back we cross back over the river via the nearest bridge which we soon realise is taking us to downtown Bilbao, and I’m not sure I like the vibe from the locals or the white powder they are merrily dividing up on the park bench but hey ho John thinks I’m overreacting and continues to walk gaily on!!

Walking back up the hill to the motorhome the sky starts to get darker and with the large clouds moving towards us, we get in just as we hear the pitter-patter on the window that then becomes one long-hitting sound as the rain falls harder.

First thing next morning John gets out to check the state of the ground, so much rain came down in the night we are concerned about the mud.

Santillana del mar is known as the town of the three lies; not holy (Santi), flat (llana) or by the sea (del mar).

Situated on the northern route of the Pilgrim’s Road to Santiago de Compostela it’s a beautiful medieval town with bright cobbled streets and tanned stone brick buildings it’s know to be one of the most historical areas of Cantabria. Since 1575 strict planning rules stipulate only residents or guests in hotels with garages may bring vehicles into the old heart of town.

At Ribadesella, the road divides the aire and after a quick cup of tea, we move to the other side and park for the night. Walking downhill into this small coastal fishing town that is split in half by the Sella river delta.

It’s an interesting place with a mediaeval town, modern architecture and a great beach that is known for spotting turtles.

Once again we find ourselves in just another car park and this time it’s in the large coastal town of Gijon. The aire as long term stayers here and as night falls is we witness people burrowing down for the night in belingo vans only to emerge in the morning to let their cat out!!

From where we park there’s a great walkway along the coast giving us views of the choppy sea as we pass the Mother of the Migrants monument. Dedicated to the pain, all mothers go through when their children migrate.

The town is known for its maritime heritage and old fishermen’s quarter but as we wander the streets it’s clear how run down it is.

With the high winds and rain continuing we decide to find somewhere to stop for a few days and it’s in Foz where we find a great little site.

With almost 15 km of white sandy beaches, it is home to one of the largest marine bird colonies in northwest Spain.

Once a fishing village, now most of its economy comes from tourism, the town is run down but the seafront is lovely.

Part of this trip has been largely spent on the A-8 motorway with us travelling around 70 miles some days,  something we rarely do but with the horrendous weather, that seems to have followed we felt the need to keep moving but with wild camping being prohibited in Spain it’s sometimes difficult to find somewhere to stop, that’s safe and has services. In our opinion, the sites are either good, bad or just dam right awful and not worth the price to stay but with the start of a new week let’s hope the weather improves.

Coordinates for aires in North Spain