Slip, sliding away in the mud, Occitanie region in southern France June 23, 2018 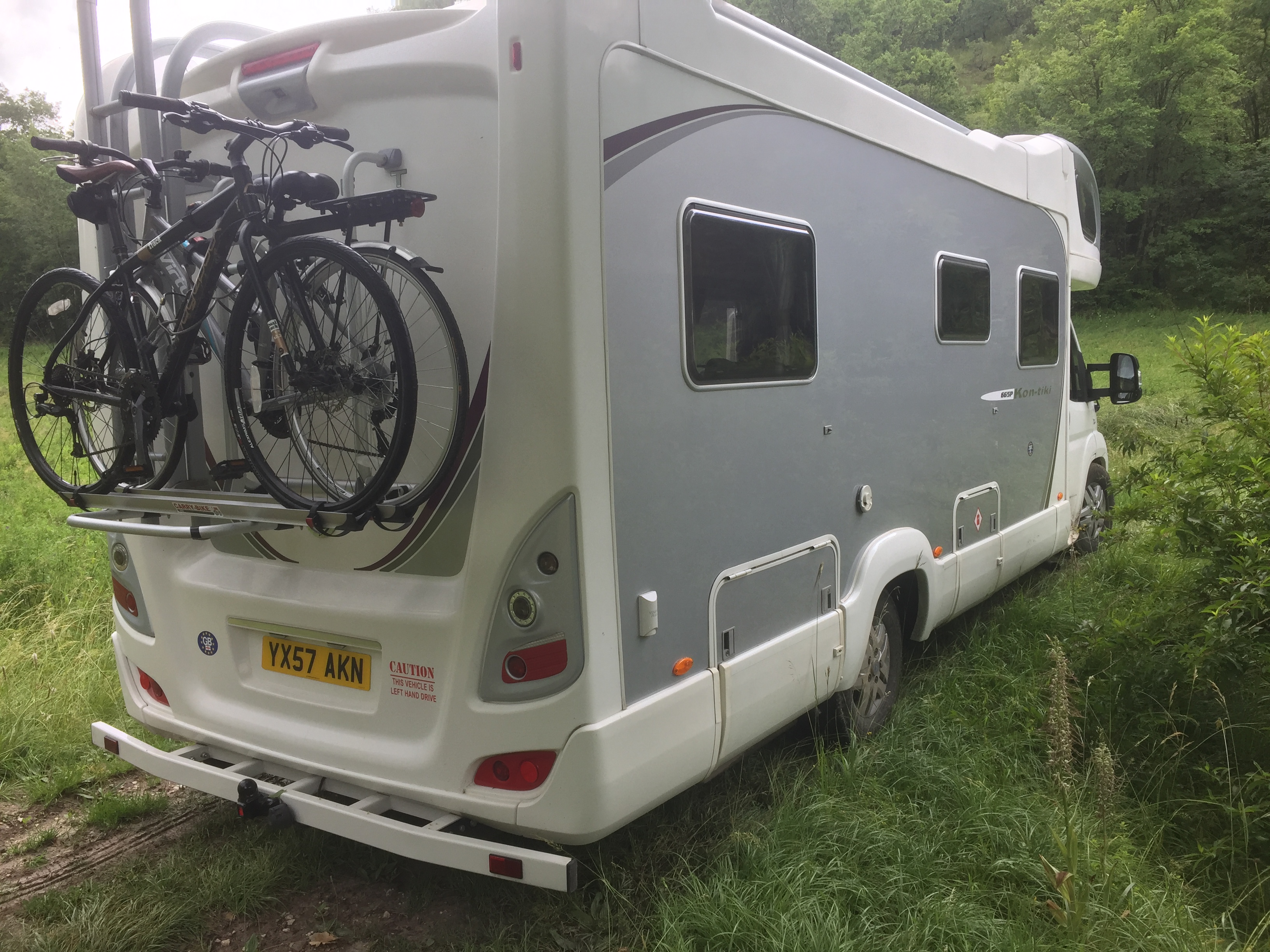 Since we have been in France the weather hasn’t been kind to us. We have had a few nice days but mostly it’s been severe storms and rain. I think Johns pleased I made him bring a coat now!

Waiting for the rain to stop

As we pass through lots of pretty villages, rivers are up and farm fields are flooded.

Several times we have ventured out for a walk around a market or village only to return quickly to the motorhome in the dry.

So we decide to drive Lauzerte to see if the weather improves. On this particular day, the sat nav decides to lose her voice, I think she is just sulking because John ignores her instructions quite a lot.

We are near the village of Le Boule when John puts in the coordinates for Lauzerte and starts to drive. Looking back I don’t think he gave the sat nav time to catch up, when she does start to give instructions it’s now in a croaky voice but we are already heading down a lane.

At first, it was fine but then the road turned to gravel, then puddles, where the water was lapping at the tyres, then thick mud.

At this stage, John thinks we should go back but I’m saying  ’ Keeping going we have been down worst roads before and got out’.

The road to no where

The dirt track now gets narrow and narrower before coming to a dead end, oh dear. The sat nav and I are both in trouble again.

John tries to turn around but the wheels just keep spinning, the muddy, wet grass is making us slip further into the field.

We are now stuck in the middle of nowhere, there’s no one in sight and the two houses near us are closed up.

Stuck in the mud

John decides to try and cycle back down the lane to find help. It isn’t long before he returns and explains that he found someone that spoke English, who then drove him to the local farm. Apparently, the farmer is used to this he pulls motorhomes out of the mud on a regular basis. Anyway, he can’t help until 2.30 so as its only 1 pm we make a cup of tea and wait.

All of a sudden there’s the sound of an engine, through the trees emerges a pickup truck, with someone resembling Antonio Banderas driving, he looks somewhat surprised to see us there, he kindly offers to pull us out. John reverses back down the lane until it’s safe to turn around.

On our way back out of the village, we wave to the farmer who is still busy talking, I think he had forgotten about us, then  stopping to say thanks to the man who drove John to the farm.

The motorhome now looks like it’s been in an off-road event so before finding somewhere to stop for the night, we go in search of water to clean it.

As for the sat nav, she is in a box on her way back to England and I’m sure if I keep giving the wrong directions, I could be too!