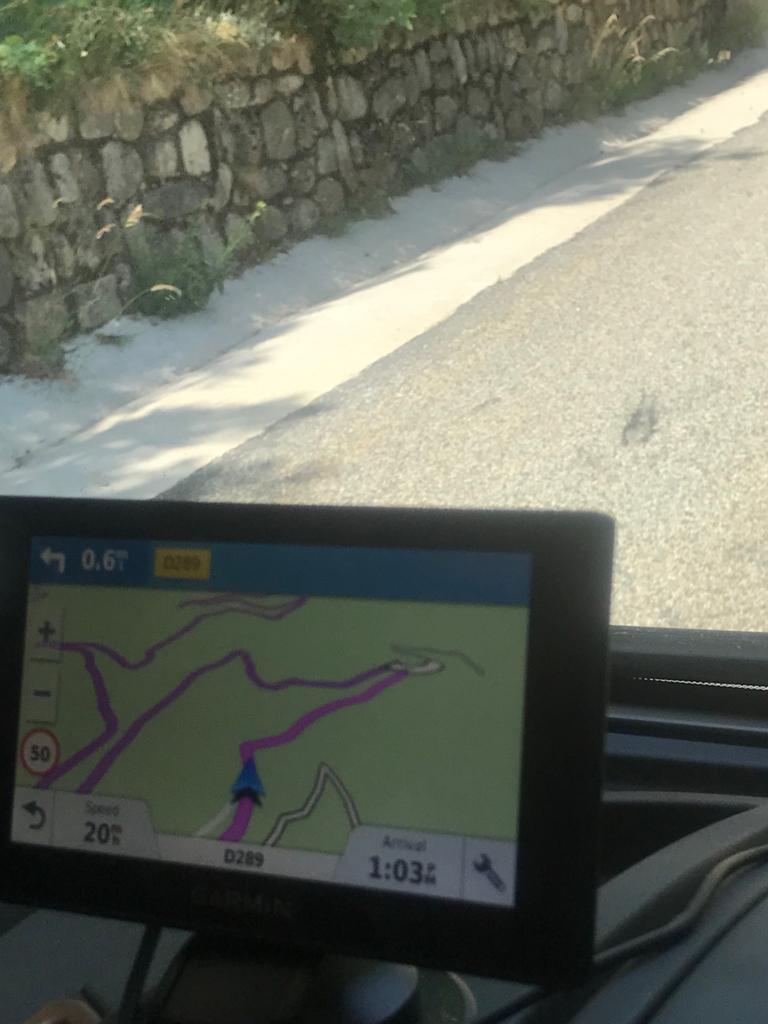 With Mont Ventoux now in the distance we head to the Ardèche.

Probably best known for its deep gorges the Ardèche is made up of many villages, some perched above, or nestling in the valleys, ancient buildings carved into the stone.

After stopping off for groceries we decide to drive to La Pont D Arc and then have lunch. It’s quite a sight as we turn the corner,  dominating the river this natural Arc at 54 metres high is stunning.

It’s a beautiful drive through the mountains with the road twisting and turning in parts it seems wild, with rushing rivers, towering gorges and deep caves.

Unfortunately, the car park opposite doesn’t resemble the picture that park for the night app is showing. The few shady spots are already taken so we park in the middle of a very hot, dusty car park. John goes off to take some photos whilst I make us lunch.  It’s a fair distance to the old town from here and once again we melting under the heat so decide to drive on.

From here we follow the road that runs along the deep canyon and at various points, it’s narrow, rugged and gouged through the rock.

Once again we pass a few aires but they aren’t very appealing and wild camping is apparently forbidden. At Ruoms we find a camping car park and as we still have credit on our card we stop here. It’s another hot day and there isn’t much shade but with the windows open, the shutters down and the awning out we hope it helps keep inside cool. Just a short walk through the campsite next door takes us down to the Ardèche river which is a great opportunity to have a swim and cool off. But it’s so hot even Johns phone sends a warning to ‘switch off the device immediately ‘.

Considering we are right opposite the entertainment stage for the campsite by midnight it’s quiet and we sleep considerably well.

Next day later than planned we pack up and drive on. Today sees us passing through several places. The first village we come across is Vogue so we park on the main road to the entrance, from here we get a nice view of the bridges spanning the river. It’s a quiet village with narrow streets and alleyways. And if you enjoy being on the water this would be the starting point for canoeing the Ardèche, it’s extremely popular here.

We pay a brief visit to Aubenas. In the heart of this old hillside town stands Montlaur Castle, it’s perched on a rocky outcrop and but offers a beautiful view of the Ardeche valley.

From here we drive to the spa town of Val’s les Bains. Snuggled up on the valley of the river Volane. It’s a place that has plenty of charm where we follow the stone alleyways to the old houses and medieval remains.

Our reason for coming to this area is a TV programme that we used to watch back in the early 2000s. A Place in France’ documented a couple of friends Nigel Farrell and Nippi Singh embarking on buying a holiday home in France.

It was hilarious, mainly because Nigel was your classic Eccentric who would follow his heart, and not really his head. And Nippy was a hardened businessman who had to try and rein in Nigel from making outlandish decisions. They seemed to irk each other a lot and I don’t know how they ever became friends but probably all done to make a tv show.

It was then followed up their plans to open an Indian restaurant in the same region, to the bemusement of the French punters. For this, they hired the help of an outrageously camp restauranteur called Reza.

Sadly both their ventures failed but it was easy to watch a programme that showed great views of the Ardèche countryside, so hence why we wanted to visit here. Anyway, after a quick stop off at the tourist information, we now realise that we have passed the restaurant and we can’t get to the house they purchased from this side of the valley.

By now it’s late afternoon when we arrive in Meyras.

Steeped in history this tiny village has just one shop and a couple of restaurants so we are surprised to see such a big petanque competition sponsored by Renault taking place.

Next morning before leaving the area and not wanting to give up on seeing at least one of the properties that featured in ‘A place in France’ we drive to Pont de Labeaume. John doesn’t think we will get the motorhome up the road so he cycles up to Les Fabres. When he returns he explains its a steep road that turns into a dirt track but he does find the property that first featured in the programme.

Moving through the Ardèche has been a fascinating experience but I had thought my days of holding on to the seat where over until we drive through the Nature reserve. At the top we stop and take in the view, well that’s once I had managed to shimmy under the electric fence. Following the footpath across fields where we get the shape of the landscape, the views are spectacular even if a little scary at times.

If you love being outdoors this is definitely the place you want to be, it’s a beautiful area we have enjoyed it here.