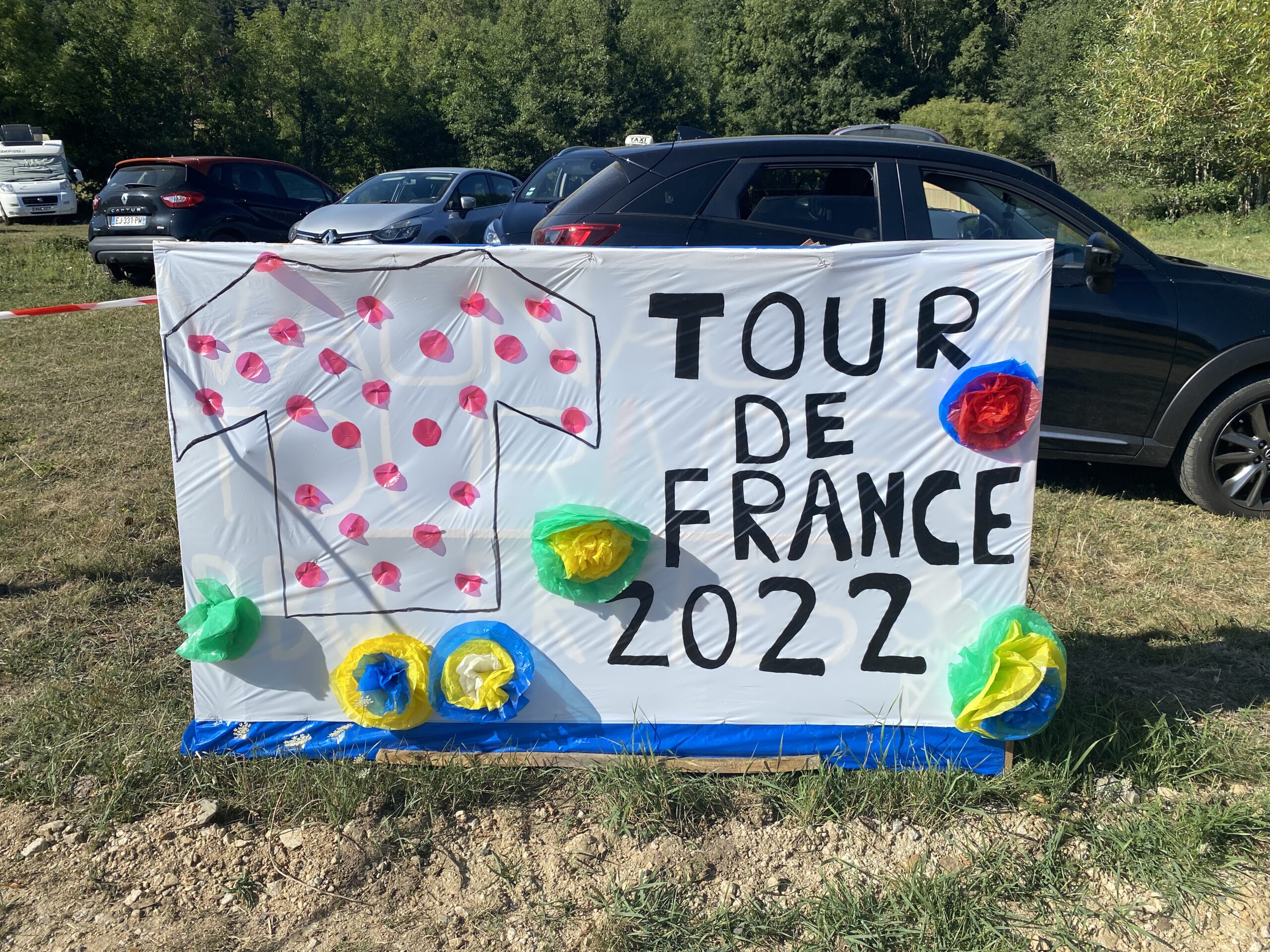 The Alps rival any region of France for drama, beauty and excitement and none more so than when the Tour de France arrives.

Over the next week, we watch several stages of the tour which saw us travel along mountain passes that look charming but give you an adrenaline rush where the words ‘wow or oh my god’ are just a normal part of the day, I’m sure some of these mountains should have ‘ do not venture in a motorhome unless you’re bonkers’ signposted.

We first watched the tour several years ago which saw us chasing our tail around different areas and that was probably due to being “over-enthusiastic” and our poor estimation of what was involved.

Now though John looks at the route map for several stages that are close to a central location to avoid too much travel and this year there’s a cluster of stages around the Alps.

For the French, the Tour is a national celebration and it is a great honour for one’s town or city to be chosen as a host venue.

Every year hundreds of thousands of spectators line the streets of villages, hamlets and the roadside to be part of the colourful, noisy atmosphere. And for people like us, it’s a great tourist attraction with fans coming from all over the world.

There is such a build-up to the race coming through so it’s important to get a good spot or park up where you want to watch it early,  either the night before or at least before the gendarmes close the roads.

Usually, we look to park up wherever there’s a spare strip of grass or a lay-by along the route and with these stages being in the Alps there’s no shortage of people out to watch the tour pass these magnificent views.

First through is the publicity caravan made up of many of France’s major brands in decorated vehicles advertising their wares and giving away gifts.

The caravan lasts about 45 minutes and sets a great atmosphere along with entertaining the crowds who have waited many hours to catch a glimpse of the riders.

It’s great fun trying to grab the freebie biscuits, packets of cereal, key rings, race flags or if you’re lucky a t-shirt from the moving vehicles that descend upon us like missiles but then you have to be careful not to get caught in the stampede, because it’s quite amazing at what people will do to get a free gift or what some people refer to as Tour tat.

Things go quiet for a while then suddenly the hoovering helicopters appear overhead and the atmosphere comes to life again. Wearing the free polka-dot t-shirt we stand outside of our decorated motorhome as the first of the riders come into sight.

The speed and noise as the riders hurtle past us makes you realise the sheer endurance needed to ride an average of 100km a day for three weeks in some of the most physically challenging terrains is testimony to the rider’s passion, drive and commitment to the sport.

We pick up the tour after they have had a rest day on Stage 10 where it finishes in Megeve, and then we continue to follow and watch a further four more stages.

As for the tour, this is a relatively short race, but it’s a tough one. It’s here the riders get their first taste of the Alps on the roads between Morzine and Megeve then it’s a long gradual climb to the line but before they even reach Saint Gervais the race is stopped due to protesters blocking the course.

For this year its the end of the tour for us, and even though the heat at times has got the better of us, we spend a couple of days with no phone service and however much planning you do you can never foresee see last-minute road closures or deviation which at times has been challenging However it’s been great fun meeting up with old and new friends along the way catching up on their adventures.

Coordinates for Aires in France