Towards the Algarve, Portugal part 2 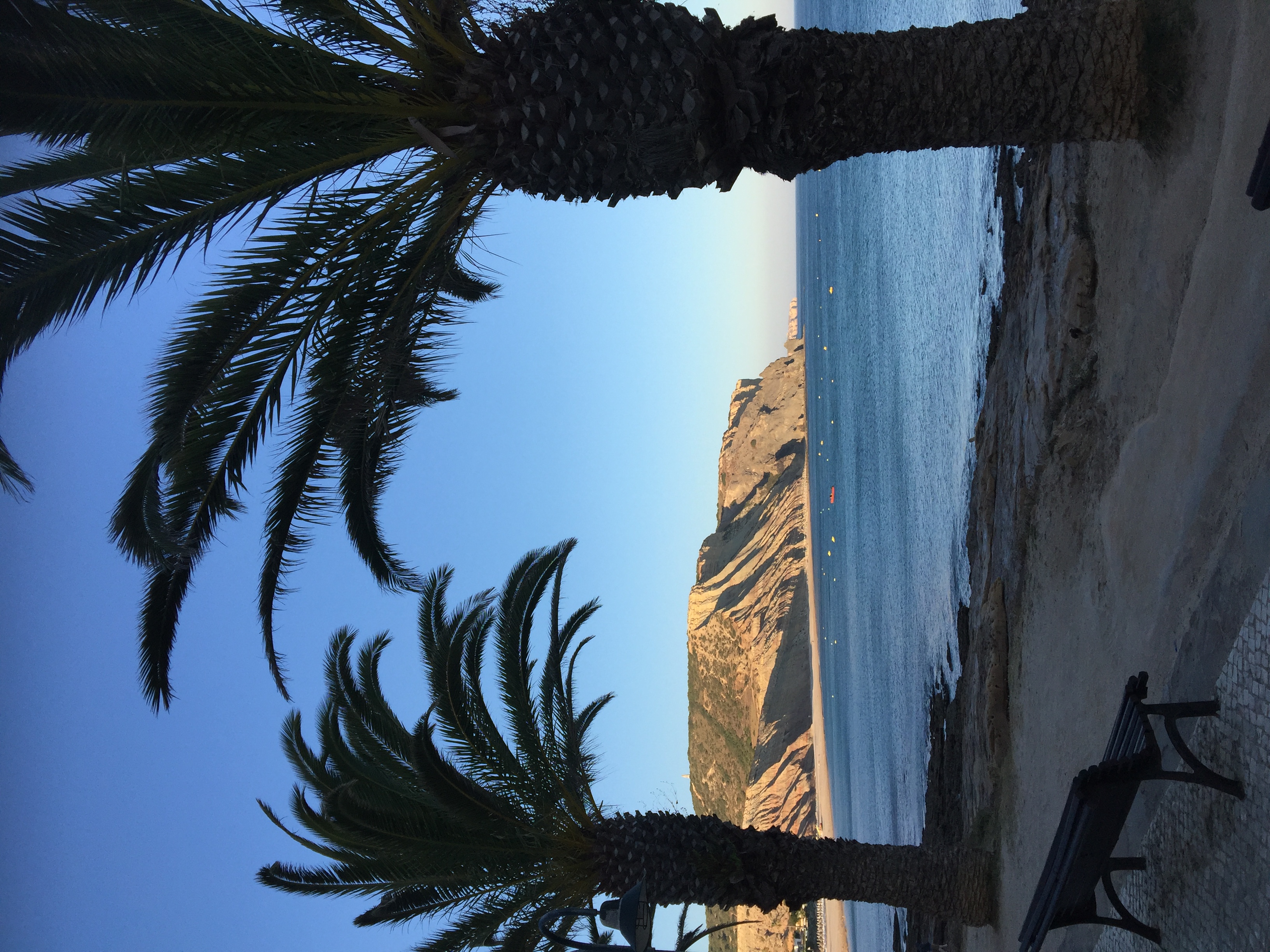 Further around the coast is Sagres,  situated at the western tip of the Algarve.                            It’s another area that surfers flock to with its clean, sheltered beaches. We drive to the remote part at Cabo Sao Vicente,  where the dramatic landscapes from the raging seas have carved immense cliffs. We park, I think rather precariously on the cliffs and soon as we step out the bracing winds make it difficult to get your balance. The landscape from here is barren from the intense sun but I’m sure in the winter months, it is also very bleak.

After driving along the coast trying to find somewhere to stop that is sheltered from the wind we end up here.

It’s a small town that was originally a fishing village that as a sandy bay, with lots of market stalls along the front. Today, it seems that tourism has replaced the fishing with hotels and apartments that extend up into the hills.

The car park we stay in is next to some tennis courts and there are about 5 other motorhomes here. For some reason,  we don’t get a  good nights sleep, even though it was quiet. We feel there’s something odd about the area that makes us unsure, it wouldn’t be somewhere we would return to.

Along the road to Albufeira, the area becomes more built up and there are several disused hotels. We are stopping here because someone John knows is on holiday and they are meeting up for a drink.

I spend the afternoon reading at the site where we are staying. It’s a disused football pitch so there’s no view but the facilities are good. It’s clear that some of the motorhomes live here full time they have quite a set up going on, garden furniture, pot plants and BBQs.  At €9 per day, reduced if you stay long term that includes electric, water and use of toilets and showers. Even though its cheap I’m not sure it’s somewhere I would spend a long time. We don’t see much of the town but what we do seems a bit like a ‘kiss me quick’ seaside town.

This seemed like the ideal time to stop for a cup of tea. A tiny village perched on a low cliff, apart from a couple of restaurants and an old telephone box where you can exchange books,  there are no tourist facilities, just a pretty church. Yet get the feeling this is what the Algarve probably looked like half-century ago. The view over the estuary is stunning looking out to the white sandy beach which is accessible by boat for €1.50 or walk at low tide. This village is definitely worth a visit.

This is our last stop in Portugal before crossing the border back into Spain. Vila Real de Santo Antonio is a pretty Portuguese town which is situated on the Rio Guadiana, at the very eastern edge of the Algarve. We park in the aire on the Rio Guadiana which separates Portugal from Spain. Later that afternoon when it’s slightly cooler we have a walk into the town which takes us about 10 minutes. It’s a pleasant town that as a central grid of streets that lead to the square where orange trees grow. The square is named after the king’s minister, who helped rebuild the original town after it was destroyed in a tsunami following the 1755 earthquake.

We decide to have dinner here so we can try one of the traditional dishes. I have codfish

(Bacalhau) that has been doused in vast quantities of salt and dried under the Mediterranean’s hot sun. It’s similar in texture to cod but this as very little taste. John as a cow steak which is dry aged beef, similar to steak.

As we walk back past the marina its much quieter, several motorhomes have joined us. We spend the rest of the evening watching the remaining fishermen and boats passing by.

The following morning we say goodbye to Portugal it’s been an interesting and fun couple of weeks. We have learnt the Portuguese word for Thankyou;  Men say “Obrigado” and women say “Obrigada”.

It’s seen us forget the time difference between Spain and Portugal, resulting in us getting up late. The strong smell from the oil refinery at Sines we carry on driving. And John helping someone else jump-start their motor home, for once it wasn’t us needing help.

Our turn to help someone

So we head towards the border,  crossing the bridge that was built in the 1990s but I’m sure the ferry across from Guadiana to Ayamonte is probably the most fun way.

2 thoughts on “Towards the Algarve, Portugal part 2”