Back in Spain, Seville and Gibraltar 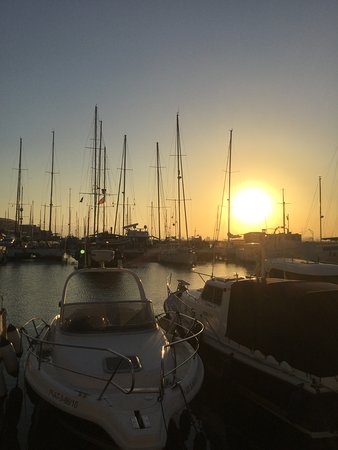 Back in Spain, we are now in the Andalucía region an area we are familiar with. its stunning hills, white-washed villages, ancient castles, sandy beaches overlooking the Mediterranean sea. Birthplace of flamenco and bullfighting it’s rich in culture with spectacular Hispano-Moorish architecture it as so much more to offer than just sprawling on a sun lounger. We are starting at Seville before moving along the coast.

After looking at the aires in Seville we opt to park at the marina in Gelves a town situated on the banks of the river Guadalquivir. It’s a secure site and one of the main attractions of the marine for people with boats is its crane capable of launching and stranding vessels of up to 25 tons, and a  hydraulic car to move the boats inside its wide dry marina.  In the evening the marina comes to life with people on the quayside having a meal and boats on the river.

We get off the bus by the Guadalquivir its here where you can see how impressive this river really is. It is the second longest river in Spain, travelling 650 kilometres across the width of Andalucia finally arriving at the Atlantic Ocean, just above Cádiz. It brought the city water, trade, clay, protection, sustenance, access to the sea and much more. Over the centuries the river has flooded bursting its banks, causing huge damage and destruction in the city.

Just across the road is the Plaza de España, a semicircle building around a huge open space. You can wander through the building, watch the flamenco dancers on the steps or take a rowing boat around the canal.

Not far from here is Parque de Maria Luisa. It’s a lovely park, full of shady paths, little fountains and formal gardens. A great place to walk or to get away from the sun for a while.

Across the city, we find narrow streets that lead to the cathedral. This is a majestic looking building dating back to around the 15th century. It claims to be the third largest of its kind in the world.

We have only spent the afternoon in this city, it’s so big you need a good couple of days to fully see it.

Our bikes at La Linea marina

It’s a while since we have been to Gibraltar so we thought we would see if anything had changed.

We planned to park at the aire in La Linea but after a quick drive around it isn’t looking very promising, it looks rather run down. An elderly man driving an older motorhome advises us to park at the marina on the other side of La Linea, so we move. It’s a lovely spot with great views of the sea, Gibraltar towering over us and the motorhome is safe whilst we go off.

We decide to cycle over the border which takes less than 20 minutes. Gibraltar is an Overseas Territory of the United Kingdom, also known as ’The Rock’. The limestone rock rising out of the sea measures 426 metres high can be seen for many miles and on a clear day, you can see Morroco and great views of Spain. From memory, it doesn’t look like much as changed here but the contrast over such a short distance is interesting from whitewashed houses to what looks like any English town, with its red pillar boxes, fish and chip shops and good old Marks and Spencer. For a short, while you forget where you are, everyone is speaking English. We decide not to do the touristy thing here we saw the Barbary macaques with our boys year ago.

The coastal town of La Línea de la Concepción or ‘La Línea’ as it’s more commonly known (its meaning ‘boundary line’ in Spanish) is just as busy today as it was over 15yrs ago. With cars queuing to cross the border you can see why it’s referred to as the ‘ The Gateway to Gibraltar’.  it’s has a market on a Wednesday and two great beaches one along each peninsular seafront. You can see why it attracts lots of visitors. Having said all this  I still think it has a border feel to the town which makes it seem run down in parts.

We don’t stop off anymore until we get further along the coast, passing Puerto Banú, Marbella and Calahonda. Things haven’t changed that much, there is still the odd crane or two towering over unfinished buildings. But the beaches that run for over 25 kilometres along this glamorous part of the coast look untouched which is good to see.