Crossing the Pyrenees into France, 2022 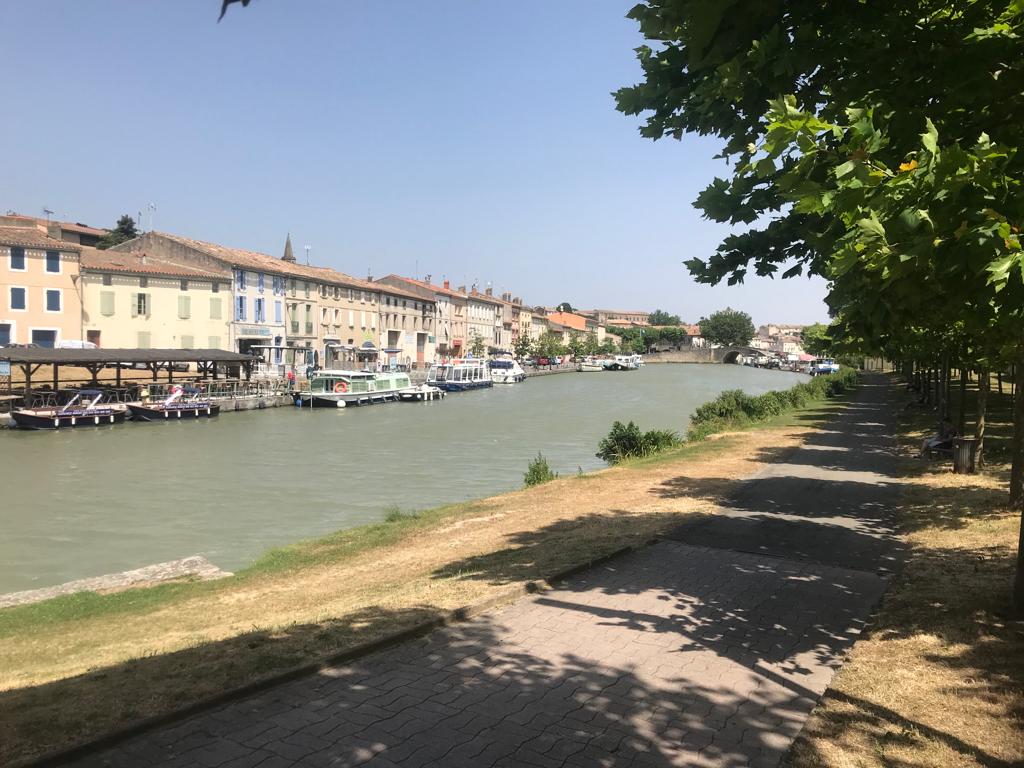 Crossing back into France through the Pyrenees into the Bayonne district the radio instantly changes back to typical French music that has a  sentimental tone, it’s the only European country we have been to where the national music is still predominant in foreign music, and it’s not a day for depressing music so we turn it off and listen to our phones soundtrack.

With the heatwave now spreading across France, we look for places that are safe for us to have the windows open at night.

At Grenade-Sur-l’Adour we find a camping-car park. Accessed by a Pass’etapes card it is part of a European network of stopovers that have all the services including wifi and is generally more secure.

Grenade-sir-l’Adour itself was founded in 1322,  and then occupied by the English until 1442. The central square with its arcades and old houses from the 14th and 15th centuries is just a 5-minute walk away. We cross the Adour river to see the picturesque view of the old houses with wooden balconies that border the river and stop for a drink.

Last night was extremely hot again and with no signs of it cooling down we are up and on the move early. The one advantage to the hot weather is the laundry dries so quick, however all this washing and wearing I now refer to our clothes as having the used look.

Heading across the country passing some of the villages we have stopped at in the past we finally arrive in Fleurance, it’s a village we know well and it’s here we stay for the next two days. As we walk into the town it’s good to see very little has changed here, there are the odd few shops lost to covid but it’s good to see the Saturday morning market is still thriving with the locals out in full force.

Right next to the river the aire in Fleurance is surrounded by tall hedges so there’s plenty of shade and best of all it’s free. We spend the afternoon sitting outside in the breeze then later in the evening when it’s cooler we walk around the lake.

Next morning it’s cabin crew to doors and we are off again this time we stop at one of the most popular points along the Canal du Midi, and home to the Foreign Legion, is the town of Castelnaudary in Aude, this area also brings in hungry visitors in search of the hearty cassoulet meal. Apart from the local election taking place today, it’s quiet and there are just the odd few people out braving the sun and strong winds.

Home for tonight is another camper-car park right next to the canal but unfortunately, it’s not the most inspiring place. When we arrive there aren’t many vans but it soon starts filling up and it’s not long before we get neighbours.

So when they venture out of their van I say “Hello”  and they are grumpy, looking like they want to be anywhere, but away in their van.

So I smile and pretend they haven’t just snubbed me,  I can’t believe, how rude and did it just happen? So to make sure I hadn’t just dreamt it or mistaken the moment, I try again only to get a half-hearted “hello” so I don’t bother after that.

We don’t always want to get into a full-blown conversation with every van that parks next to us but it’s nice to just be pleasant and say hello, especially when we are so close.

Up until now, we have encountered very few rude people but last night’s neighbours were, and it’s the normally the French who have a reputation for being rude but not, in this case, it was good old English, give me Clark Griswold as a neighbour any day.

Having said that after John described me as looking like Jack Nichols from the film Witches of East wick, I’m not surprised they don’t want to speak.

This week we will start another house sit so fingers crossed we find cooler weather and hopefully someone who wants a chit along with a chat.

Coordinates for Aires in France