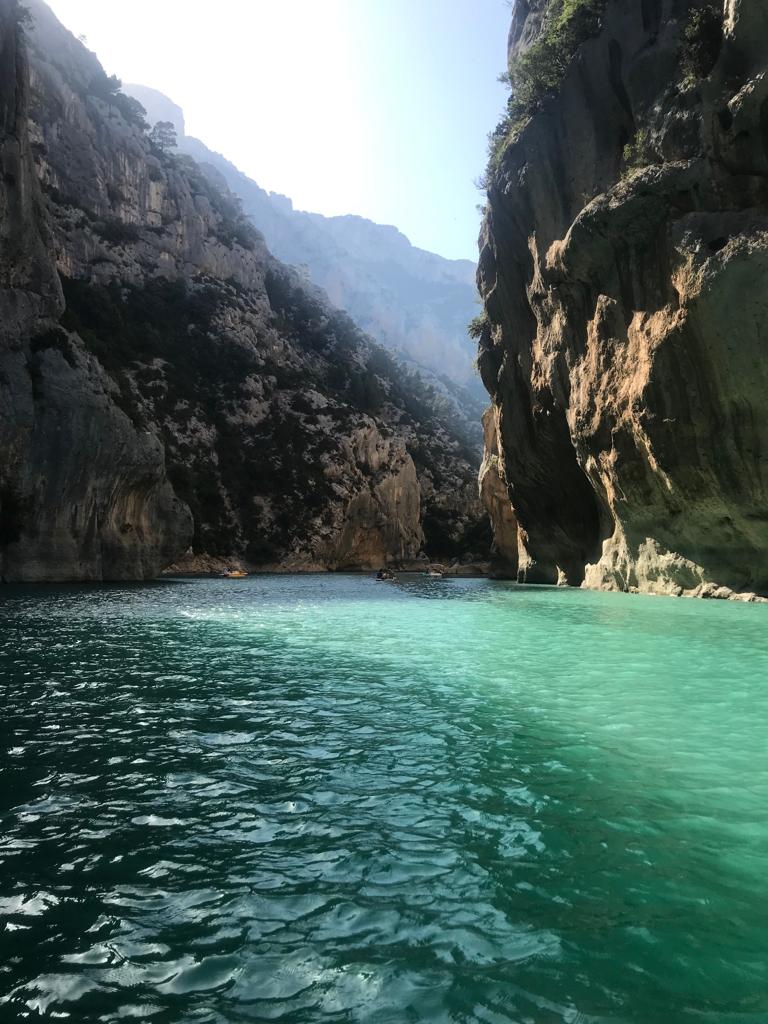 This morning as we approach the border to go back into France it looks like it’s going to be another hot day.

There are a few other vehicles in front of us at the crossing when we are randomly pulled to one side to be searched. Before entering the motorhome the tall policeman checks our passports, then as a quick look around but refuses to have a photo with me, perhaps we do look like shady characters!  A few quick questions and we are then on our way.

Menton is the first town once over the border and it seems a quiet, sleepy town. With it’s dazzling coastline and the heat coming down we stop for a swim. As John helps me clamber over the huge rocks it’s a warm, clear Mediterranean Sea we swim in.

We have been to neighbouring Monaco before so we decide just to drive through but oh how we wish we hadn’t. Along, with road works and new buildings under construction parts are closed off so it is mayhem.

Just when we think we are on the right road out of here there’s another road closure and we come face to face with a rather large lorry. John as no choice but to reverse, I’m just relieved that I don’t do any driving!

So after stopping to pick up groceries we head inland away from the manic of the coast.

Gourdon is where we head for but getting there is an adventure in its self. We take the road through the Gorges du loop which at times become very narrow. Finally reaching the tiny village perched on the hill, we understand why it’s nicknamed ‘Eagles nest’. It’s narrow streets filled with shops selling perfume and glass, lead us down to the most amazing panoramic views of French Riviera.

Tonight it’s extremely hot so I sit outside on the bench with my cup of tea. I soon spot a couple walking towards me with a boxer dog and I can’t let them pass without saying Bonjour. Laurent and his wife Helene live in the neighbouring village. Along  with google translate and the odd word we both understand they tell us Lilas story. They rescued 9yr old Lilas  just over a year ago and even though she lead a sad life it’s clear she is now loved. Laurent is a animal communicator so who better to look after her. We could quite easily take Lilas with us she is lovely and brings back happy memories of Hooch.

Soon after we say good bye to Lilas  our neighbours for tonight come over for a chat. Sue and Barry are from Hobert, Tasmania  and have hired a van to travel Europe. It’s interesting chatting to them they lead quite an adventurous life back home in Tasmania. There they are known as ’Grey Nomads’ travelling in a caravan for half the year where they can be off grid for weeks. So when they start saying that they have seen a few ’whiz bangs’ we are a little confused until they explain. It’s a small van that lots of young people travel in and refers to the sliding door on the side of the van.

When closing (which seems to happen every few minutes) it slides and goes ‘whiz’ then closes and goes ‘bang’. And tonight there’s two whiz bangs in the corner.

News on the radio the following morning is that there’s going to be a heat wave across Europe but with the breeze passing through the windows we don’t really take must notice. That is until we reach the village of Castalone at 724 metres high there’s now no where to go to get  out of the sun.

Situated between the Alpes and the Mediterranean this area as always been an important crossing point. The roads here connect Grasse to Digne and Draguignan to Barcelonnette. Following in the footsteps of Napoleon we travel along part of this mythical and historical road passing fields of purple lavender, the smell of lavender and mint wafting  into the front of the motorhome is amazing.

Leading us into the heart of the Provence in the verdon valley we find Europe’s answer to the Grand Canyon and they aren’t wrong.

With the river that winds through farmland and woods, it’s the biggest canyon in Europe. At the foot of the gorges we find the artificial lake at Saint – Croix. Made following the building of the dam on the verdon river the  landscape is breathtaking where the cut of the stone buildings blends with the rough stone carved by time.

It’s so hot we find the nearest campsite to stop at. It’s a strange place with an unusual lay out and not a lot of shade but with few other options it will do for tonight.

Next morning we are up early and head straight down to the lake for a swim. So we can get a different view of the lake we hire a pedalo for an hour. We are amazed by the magnificent gorges, the river is about 50km long and lined with cliffs that at certain points reach the height of 700 metres. Apparently Vultures were reintroduced to the area in 1999 and made their homes in the steep cliffs.

We get back to the motorhome just after 11 am and it’s boiling, it feels like we are sitting in a sauna. Once again we are in search of somewhere cool. We pass a few aires but non of them have any shade and the vans are parked so close together we feel that in this heat we need room.

In last few weeks we have gone from full on down pours to blistering heat that continues into the night, except for the odd storm but that doesn’t clear the air.

By the time we find the campsite at Apt it’s now 45 degrees. It’s unbearable it feels like we are melting in our seats.

Later that evening we do manage a walk to the market in between the trips we take to the shower block to cool down.

The whole part of this trip is to visit and explore places but in this heat it’s impossible.

With very little change in the temperature the following morning we drive past some stunning views on the way to the village in Gordes. Walking down to this tiny village we can hear a lot of commotion, people shouting and coloured flares going off. We soon realise it’s a yellow vest protest and for such a small group they make an awful lot of noise.

It’s so hot we don’t spend long here, we find somewhere shady to park, the kettle goes on and we look at where we are off to next.