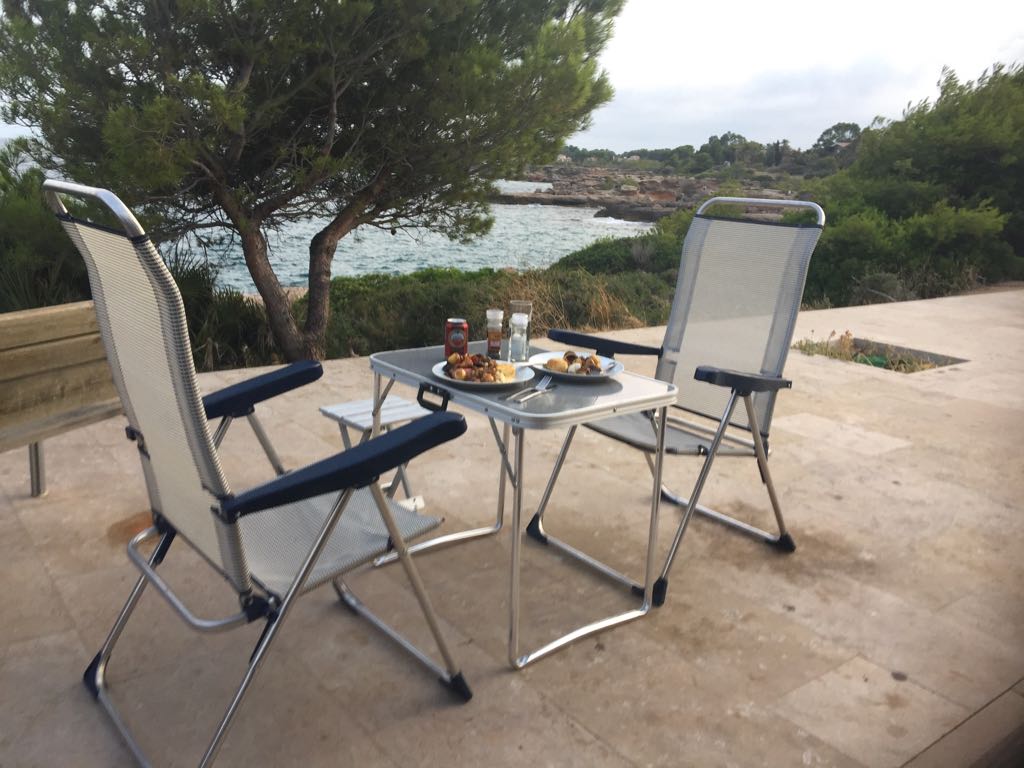 In the Costa Blanca, we find the temperature and humidity are still high, at times unbearable.

In parts, the clear blue sea is meet with a beach full of tourists wielding their brollies, Ferias taking place and manic scooter drivers. I can see why the locals retreat to the hills.

Del who we have known for years now lives fulltime in Algorfa. Just 15 minutes from Guardamar Beach, its a charming inland village with a large square and an impressive church. The area is situated in fertile countryside that grows citrus fruit.

Having a drink at Del’s local

Del’s apartment is in a lovely complex on the edge of the village from his balcony you get a view of daily life and the mountains.  However, this quiet sleepy village as seen several earthquakes in recent years. Del takes us on a tour of the area and neighbouring village before stopping off for a drink at his local. there we watch the shepherd stopping the traffic so his goats can cross the road into another field.

On our way back we stop at a recently opened Indian restaurant. We have the set menu and at €9 each it’s worth every Euro. Great tasting and so much food we couldn’t finish it.

Tonight we stop at the back of Del’s apartment unfortunately for us the neighbouring village is holding its Feria which goes on until 5 in the morning. With just open fields separating the villages it’s like having our own rave outside the motorhome. We try shutting the windows but it’s like an oven, at 3 in the morning, John sits perched on the steps of motorhome willing the music to stop.

Once again it’s going to be another hot day, it’s only 10 am and the temperature is already 43. So we say a BIG thank you to Del and go in search of somewhere cooler. Both of us are hot, tired and irritable so we decide to find somewhere that has a swimming pool and that is secure.

An ancient fishing village that has a wonderful mixture of old Valencian culture and modern tourist facilities. It is a great base from which to explore the local area or enjoy the many local beaches. Calpe has three of the most beautiful sandy beaches along this part of the coast it’s from here you can see ‘The Rock of Ifach’, reaching an impressive 332 metres.

Apparently from the top it as magnificent panoramic views and on a clear day, the island of Ibiza is visible. But it’s a tough climb up the rock which is reached through a short tunnel. There are almost no safety features and isn’t recommended for anybody with a fear of heights, the very young, or the remotely unfit.

The site we find in Calpe is about a 10-minute walk to the seafront. It’s probably the most expensive site we have stayed on so far. It as all the facilities we were looking for it’s clean, secure and has a swimming pool. Apart from a walk to the beach for a swim, later on, we spend the rest of the day by the pool.

Next morning we pass a rather impressive building that turns out to be the Palau les arts Reina Sofia. It’s a spectacular building, designed by the Valencian architect Santiago Calatrava, dedicated to promoting the performing arts. It is set to become one of the finest international venues for theatre, dance, opera and music.

El Saler is a small village on the southern edge of Valencia, it’s stunning surroundings have earned it environmental protection. Albufera Natural Park covers an area of 21,000 hectares. It is an area of great ecological value, the chosen hibernation spot for many rare species of waterbirds and home to a wide variety of local vegetable and rice fields.

Even though the temperature gauge is saying it’s cooler today (37) it doesn’t feel like it. We were hoping to wild camp along the coast but once again we need the windows open so we decide to find a site.

It’s a basic site with no view, so after dinner, we have a walk along the main road but there is only a couple of bars open and the street isn’t very well lit. So we head back.

With all the doors and windows open it isn’t getting any cooler so I try and sleep outside in the car park. It’s not long before our neighbours join me. We have barely said hello, now we are trying to sleep within a few feet of each other. After a while, I can’t stand her snoring any longer and the midges are getting to me so I go back in.

In hindsight, I think we should have stayed at El Saler for one more night. It’s so hot we go into Lidl just to buy bread and cool down. Along this part of the coast, there are not many official aires. There are car parks that we could stay in but because it’s so hot we need the windows open and if there aren’t any other motorhomes around it’s probably not wise that stay. A couple of times we try to cool off in the sea buts it’s quite rough today. John manages a quick swim and I sit by the water’s edge.

The only aire that we find that’s secure is 12 miles inland as the reviews are good and it’s getting late we decide to go there. Advertised at €8, once there the water, electric and drainage are extra.

The €8 is waived if you eat in the restaurant so we decide to do this. At €16 each for the menu of the day that doesn’t include wine or coffee is probably the most we have spent so far, and soon we wish we hadn’t bothered. From starter to dessert the food was disgusting. We both ordered beef goulash with the homemade pasta, recommended by the waitress. Well,  she clearly hasn’t tried the food or doesn’t have any taste buds. We have never been served anything like this before the pasta looked and smelt like playdough, it was awful. Shame really because the site itself was nice.

So this morning we head back to the coast. There’s a car park just up from the beach and there are a few motorhomes here so this is where we stay for the next couple of days.

Trying to get cool

It’s a stunning location where we can walk, swim and watch the sunset

Down at the beach with our camber sands windbreak for shade, we only manage an hour it’s so hot. We try to cool down as best we can showering several times a day by the beach or swimming, not even the storm and sudden downpour of rain work.

Hoping the rain cools us down

I still find it too hot to sleep but a couple of people trying the motorhome doors and the police searching the boots of cars keeps me entertained whilst John snores his head off!

If Del Boy from Only Fools and Horses has a Spanish equivalent, I think we have found him. Marius owns the site we are staying at and he’s a right wheeler-dealer. He has it all going on here BBQ, shop, pizza delivery and bar. Marius first trip around the site is collecting bread orders for the following day. His second is with a Porro a traditional glass pitcher with whiskey, beer and lemon everyone gets a try.

Just a short distance from the site and we are at the beach. From here we cycle for 5 miles before it becomes too crowded with shops and bars so we turn back. We decide to stay at this site for a couple of days so we call into the supermarket. John waits with the bikes whilst I go in, but think I underestimated how much I can fit on my bike rack. After shuffling the bags and rucksack I end up with just the large bag of crisps on the rack, John has the rest!

This is a little more inland than we have been used to of late. It’s a small charming winery with lovely scenery. producing only a modest 18,000 bottles of cava a year, all made by hand with no added chemicals, only love.

We decide to do the wine tasting and cave tour they advertise but typical Spain no one turns up to take the tour, so we have a walk around the vineyard and up into the village.

There are only 5 motorhomes here so there’s lots of space. We sit outside watching the storm over the mountains heading our direction, it isn’t long before the rain starts which is rather refreshing.