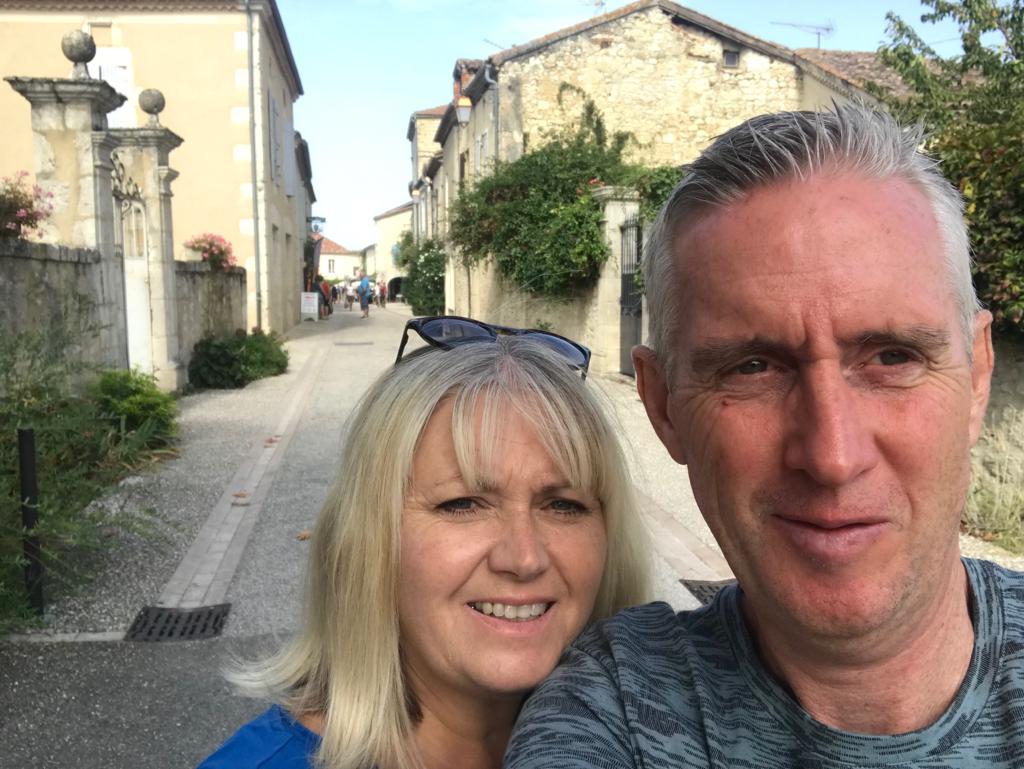 From the Dordogne, we head down to the Gers department and the drive is a familiar route for us passing many places we have visited before. It’s in the village of Cadeilhan that we first house sat for Janet and John last year so we are returning to look after Louis their dog whilst they are away again.

As we pull into their drive it’s a lovely sunny day and we can see that they have been busy over the year doing different things to the house and garden, and it all looks great.

Janet gives us a quick rundown of things that might have changed, but most things seem to be pretty much the as they were, so it looks like I’ll still be sharing the washing line with the ants again!

We have a few tasks like watering the lawn and flowers and keeping the pool clean but our primary job is to look after Louis, which we were more than happy to do and in exchange, we get to use their fab new car.

Most of our days consisted of walking Louis either through the surrounding farm fields or at the lake in nearby Fleurance and tending to the pool and garden. We also get to try what’s growing in the vegetable patch. With green tomatoes weighing heavy on the vines waiting to ripen, aubergines and delicious new potatoes, we are getting quite used to all this living off the land the taste of homegrown produce is amazing, it also makes you start to become very frugal.

John gets to meet up with the local cycling groups again at Fleurance and Lectoure. With the low traffic on the country lanes around here, it makes exploring the countryside on two wheels great fun and it’s much safer.

We spent time with our nephew Daniel who was on holiday in the area. It was lovely showing him what we get up to and the local area.

Louis this time wasn’t quite himself so we made a couple of trips to the vets to gets his medication but for a little dog, he has a big personality, following us where ever we went or letting us know when it was dinner time. And it was lovely to meet Susan and Pierre for a coffee in Fleurance to see what they have been up to over the last year.

Having seen lots of the area before we don’t feel the need to do lots of sightseeing but make the most of returning to places we enjoyed seeing and these are the ones we think worthy of visiting.

The Gers is a quiet corner of south-west France with its beautiful undulating countryside, sunflower fields, clumps of woodland and sleepy bastides, and only an hour from the spectacular Pyrenees, which on a clear day we can see.

Most of the small towns and villages around this area have a grid layout in the centre. This is a telltale sign of a bastide town, built in a rush for strategic purposes when England and France were fighting for control of Gascony in the 13th and 14th centuries.

Fleurance which is one of my favourite villages is one such place. Arranged around an arcaded central square with statues on each corner representing a different season. This time we venture inside the Church of Saint-Laurent, which has 15th-century stained glass by Arnaud de Moles, the same master glassmaker who composed with windows in Auch Cathedral, it’s absolutely beautiful inside.

Every Tuesday in the square there’s a typical french market where almost everything sold here is locally grown, so there’s no better way to get to know what is produced in this region from wine, preserves, cheese, charcuterie, fruits and vegetables, all sold in a cheerful atmosphere. Sitting under the arches at Cafe du centre is a great place to sit with a morning coffee and watch the cheek – kissing and gusty banter between vendors and customers.

Auch is the closest major town to us and it’s a place we never get bored of visiting. The view from the old Episcopal quarter raised high above the Gers River its stunning. We then follow the steep stairway known as the Escalier Monumental built in medieval times to help its citizens get down to the river safely, passing the statue of Auch’s favourite son D’artagnan that graces the 370 steps we walk down.

John especially likes the village of Lectoure, with its single thoroughfare that arcs over a high ridgeline, turning every side street into a picture frame for the Gascon countryside far below.

At the village of St clar we return to the Vide Grendier ( Empty loft ), the idea is that the locals find all their toot, – I mean, valuable treasures and take it to a specific location on a certain date, and try to sell it to some unsuspecting passers-by, so similar to our boot fairs but here it is some of the locals front rooms you can venture into to see what they have been hoarding for years. We think it’s one French tradition not to be missed as we wander around the streets filled with tables full of exciting objects for sale, with music playing and local treats to sample its a fun way to spend a Sunday morning.

Slowly over the weeks we are here summer begins to fade and autumn starts to set in. With the evenings getting dark early and the temperature dropping it’s time to get our jumpers and jeans back out and for us to pack up and move on. I can see why the villages and towns here have us enthralled they are so friendly and welcoming, one day we hope to return again.

Thank you to Janet and John for having us back again we have enjoyed looking after Louis.