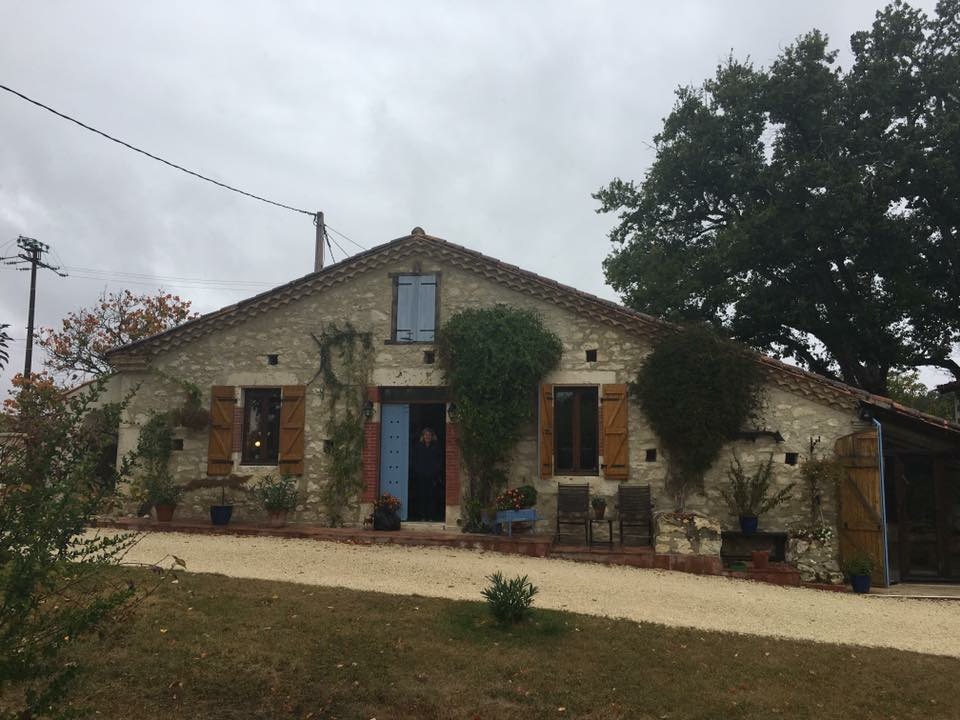 It’s a short drive from Fleurance to the village of Cadeilhan, so it doesn’t take us long to get to our next housesit. For the next month we have been tasked with looking after 13 yr old Louis, found wandering the streets of Carcassonne Louis is a rescue dog. Janet and John, Louis owners, give us a warm welcome and over lunch in the garden, we spend time getting to know each other,  about Louis and how everything around the house works.

Later that evening we all go into Fleurance for dinner where we are introduced to Susan and Pier they will be our contact if we have any problems.

Next morning Janet, John and their puppy Danny leave, whilst we take Louis for his walk. He loves wandering around the pond at the bottom of the farm fields, where we spot deer in the neighbouring field.

Louis is a lovely dog, over the coming weeks he really takes to John, as soon as John moves or sits on the settee, Louis is there staring up at him waiting to jump up and sit next to him.

The house is a typical old Gersoise house with lovely gardens, surrounded by woods and fields with corn and sunflowers growing along side by side. Most of our time is spent at the house walking or playing with Louis and enjoying the pool. Along with keeping the house tidy and the pool clean, it’s surprising how quick the time goes.

Janet and John have been kind enough to let us use their car, allowing us to drive into Fleurance or around the countryside.

So each Tuesday we go to the market in Fleurance it’s a real pleasure to spend the morning wandering around witnessing good old fashioned Frenchness.  At noon the eerie wail of an air raid siren sounds across the town, a stark reminder of what life was like during wartime in lots of countries. After having a wander we stop off to say ”Bonjour” and have a coffee with Susan and Pier.

Susan invites us along to cinema club that runs fortnightly on a Thursdays. So we go along to watch ‘Lucky’ starring the late Harry Dean Stanton. It’s a lovely evening with an aperitif afterwards, it’s also an opportunity to meet new people and see more of village life.

Later that week we get to see some familiar faces too, our friends Tim and Alison stop off to see us they are on their way to Spain in their motorhome. And what a surprise I get when someone behind me at the bar in St Clar starts speaking to me, I turn to find Chay standing there. Sadly it’s only a short visit,  so Chay only gets to see a couple of the villages we have been to but it was lovely to see him.

Out in St Clar with Chay, Tim and Alison

John manages to get out cycling twice a week with the Lectoure club, they are a friendly bunch with a good atmosphere between the riders, they make him welcome.

Ride out with Lecture cycling club

Our time here is coming to an end, staying in one place for a while you really get to appreciate the area.

When we arrived the weather was still gorgeous, I was able to sit outside by the plancha and read but slowly over the next week autumn starts to arrive, it turns colder and leaves are falling from the trees.

Where Louis and I would sit and read

We have thoroughly enjoyed our time here with nothing but the French countryside and Louis to keep us company its been totally relaxing. The only downside was having to say goodbye to Louis he is a lovely dog we had become quite attached to him.

Walk out round the pond

It’s early afternoon when Janet, John and Danny return so we spend the evening chatting over dinner. It’s been lovely meeting them and one day we hope to return, a BIG thank you to Janet and John for allowing us into their home.