Lakes of Lombardy down to Vento region 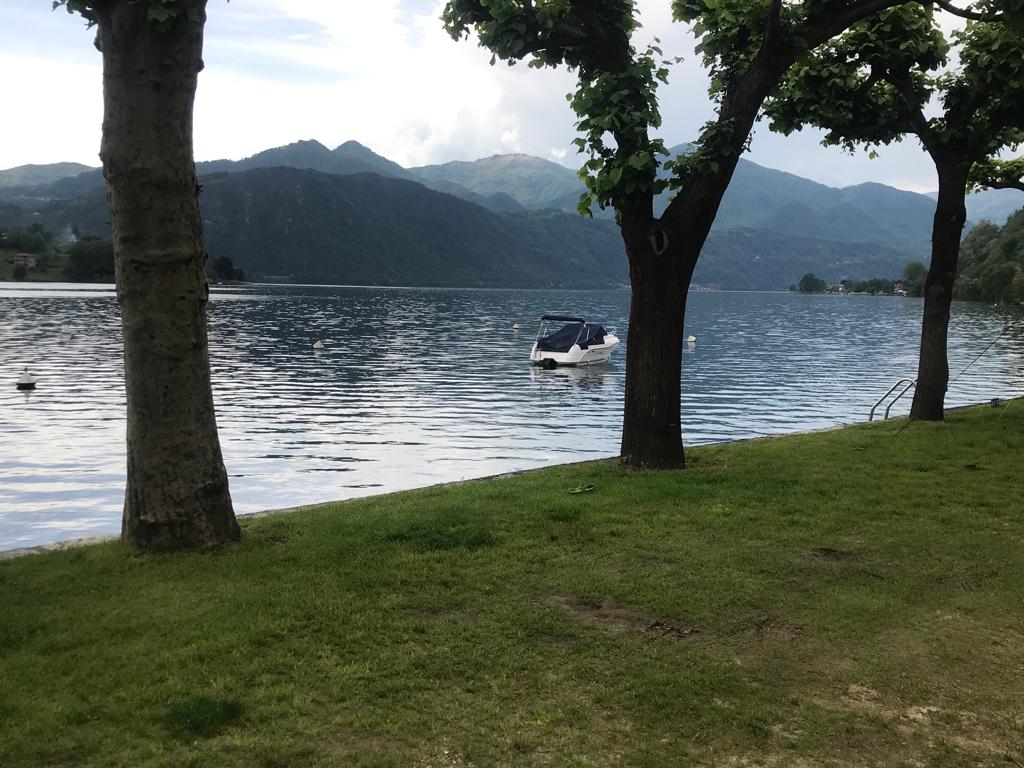 Leaving the snowy mountain tops in the alps we enter the rocky Italian mountains. Shortly after the village of Gondo we, drive up to the border. With 3 Italian police standing in the middle of the road we assume we are going to be stopped, but they just keep talking and stare at as we drive by. Driving through the rocky formations and the hilly landscape we instantly notice the difference in the roads, they are in a terrible state. The top surface of the road is missing, the poor motorhome really does judder when we drop onto them, as do our teeth!

We switch the radio on to find ‘bone shake ‘ playing by Rag and bone man, it’s very appropriate. At one stage poor Ditzy nearly flys across the dash board.

Shortly after passing the magnificent gorge of Crevoladossola, we stop for a quick cup of tea to decide where to head first and what roads to take.

John finds a campsite right next to the lake Orta, it’s a little more expensive but the views are worth it.

May be not as well known as the other Italian lakes, this place as charm and maybe some of its charm, if not all, comes from the fact it’s less well known. I think it’s a hidden gem to be individually discovered and turns out to be are favourite lake in Italy. We like it here, beautiful views, no crowds, just quiet and relaxing.

It’s a 2 km walk to the quaint little village where we stop off for ice cream on our way. With it’s narrow streets leading to its famous square with views over the lake to the mystical island of San Giulio.

We spend the evening outside watching the sun set over the lake. Next morning we sit with our coffee while the lake comes to life, boat engines start, people fishing and swimming. Shame we have to move on.

In need of some groceries we stop off at Euro spin before heading to Como where the sky suddenly starts to turn dark it looks like the storm forecast for last night as finally arrived. We put the coordinates into Ditzy for the secure sosta  (Italy’s equivalent of an aire) but when we arrive it’s full. Part of us is slightly relieved as it’s not the most inspiring place, sandwiched between shops and a lorry park. With the rain pouring down we park behind an English lorry, make something to eat and get our bearings. Some of the other sostas  around here have had reports of break ins.

With the weather set to continue like this for the rest of the day we make the decision to find somewhere on the outskirts to stop but before that we drive long the edge of the lake for a short distance but soon we realise our mistake. With the road becoming narrower and the houses more compact it’s scary when we meet on coming traffic. We decide to turn around, well thats no problem when you are in a small car but not so easy trying to find somewhere to turn a motorhome around.

Finally we make it back down and make our way out of the centre away from mad Italian drivers who don’t seem to understand signals.

We are underwhelmed with Como, perhaps we had a predetermined expectation that it would be some kind of magical place, well Hollywood icons live there. Sadly I’m afraid it did not meet our expectations, perhaps on a different day with better weather and a glimpse of George Clooney who knows we may have seen things differently. Although admittedly there are some beautiful places near by.

In need of water we stop off at Ponte Lambro where along with the locals we refill our water bottles for 5 cents a litre. Just a bit further on is Castelmarte we follow the winding road up to the sosta tucked behind the cemetery. There are already three motorhomes here but we soon realise they been parked up, no one is staying in them. So it’s a relief when another motorhome turns up and we soon get talking. Like us Garry and Steph are in the area to watch the Giro d Italia cycling. They suggest we go to the  a neighbouring village to watch it. Next morning we are up early, with it raining once again we head off. It’s only about 8 miles to the village of Madonna del Ghisallo but we soon come across a road closure. It takes Ditzy a few minutes to workout a different route. Now taking us down narrowing, overgrown lanes we turn the corner to find a bridge. John gets out to see if we will fit under when a Italian car appears the other side with all its passengers signalling for us to move forward slowly it’s a tense moment.

Finally we arrive at the village where theres a hive of activity. Locals decorating the streets with pink bows and sponsors for the event putting up banners. The Giro d’Italia is one of the biggest and most popular sporting events in Italy and stage 15 will pass through here before heading for Como.

As we drive into where the other motorhomes are there’s an elderly chap with his hands in his pockets walking towards us, he signs for us to put the window down. Apparently it’s €3 to park, there are no signs stating this and with only €2.50 in change he doesn’t argue when we say this is all we have, we think he is trying his luck has he sits back in his Mercedes!

Parking up behind Garry and Steph it’s a quick cup of tea before having a look around the village. It’s a small village we a couple of shops and bars. The chapel at the top of the hill is now a cycling museum with photos, bikes hanging from the ceiling, cycling jerseys and a eternal flame for cyclists who have died. One particularly notable artifact is the crumpled bicycle that Fabia Casartelli was riding when he crashed and died whilst taking part in the Tour de France. It’s interesting watching all of the cyclists who turn up to watch the race go inside to pray, it clearly is a special place for them.

It’s finally stopped raining when we find a spot to watch the race. With helicopters flying over head,  promotional cars and support vehicles driving past, music blaring and honkers sounding its a great atmosphere.

When the church bells toll at 3.30 the first of the cyclists make it to the top of the steep hill that climbs up from the shores of Lake Como.

The huge crowd that has turned out to watch is cheering and supporting every rider. It’s a lovely village but we are running low on water to shower with so we move. Before leaving we say our goodbyes and exchange contact details with Garry and Steph, hopefully our paths will cross again.

At Olginate we find an aire for €10 we can get water and electric. Right next to the lake and a few minutes from the town it’s a great spot for cycling and walking. We decide to spend the next two days here but unfortunately for us it continues to rain heavily.

With the weather forecast looking good around Lake Garda we find a sosta on the edge of the lake at Lido di Lonto.

A wander a long the lake sees us walk about 8 miles it’s early evening when we get back and sit down to eat and there’s a steady flow of motorhomes arriving.  Whilst we eat we watch the lake and clouds turn dark it looks like there’s a storm on the way and it soon starts raining. We don’t think anything of it when another van passes until there is a loud bang and we move slightly. John gets out to see what’s going on. Trying to park in a space just in front of us, they had reversed catching the front of our motorhome. Fortunately there’s only a couple of of scratches and a little paint missing on ours, it looks like their motorhome has come off worst.

Following morning it looks like the storm has done the trick, the sky is clear. Deciding to use the toll roads we are hoping for a smother ride but it doesn’t make any difference they aren’t much better in fact some of the potholes are bigger! Trying to pay also becomes a challenge

We soon established that lots of the tolls only take cash so it’s a crash course in Italian for me when we park up and I have to try and pay at the office, thank goodness for google translate.

We plan to visit Venice tomorrow but because it’s a city and there’s more chance of criminal activity taking place we decide to find a sosta that’s secure on the outskirts.

Pianiga is located on the southwestern edge of the province of Venice, Up to the World War II the main occupation of the inhabitants here was  agriculture. The land owners employed the local people who lived in rustic poor houses called “casoni”.

Today none of them exist any longer because they reminded them of the humiliating past of poverty, so nothing was done for their conservation and all them have deteriorated by weather and lost forever.

The sosta here is run by motorhome enthusiasts who visit the site regularly over the course of the day. It’s in a lovely area, the pretty little town is great for walking and cycling we spend two days here.

We cycle the two miles to catch the train straight into Santa Lucia station from here we cross the bridge to find ourselves once again in the narrow streets of Venice.

Venice is truly a magical floating city. We spend the day exploring the narrow bridges and the labyrinth of canals.

As with most cities in Italy, the top activity is simply strolling the narrow passage ways and getting lost in the beauty.

You can’t fail to be inspired by boats darting in and out of canals, people disappearing down cobbled streets and over bridges, with church domes and sights such as San Marco square and Rialto bridge what is there not to like.

Venice is a very special place, this is our 4th visit and I don’t think we will ever tire of it. There’s something extremely romantic and charming about it. With so much history to be seen on this magical little island, I’m sure this is one part of Italy we will definitely return to.

2 thoughts on “Lakes of Lombardy down to Vento region”